‘It’s no fun to be bad at your job:’ Pro recounts missing 23 straight cuts 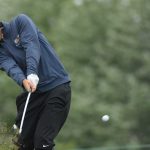 Luke Guthrie hits a shot on Friday on the 17th hole at the Glen Club.

Luke Guthrie, minutes after playing through rain, unseasonable 50-degree temps and brisk winds off Lake Michigan, was asked how he’d de-ice. “Maybe some Giordano’s tonight,” he said. “Nice deep dish pizza sounds right on a day like today.” The Korn Ferry Tour is playing its Evans Scholars Invitational this weekend just north of Chicago, and nothing may warm the mind, body and soul there better than a thick crust, a pound of cheese and rich sauce and toppings.

He also had plans for Saturday. And Sunday.

On Feb. 14, 2020, Guthrie made the cut at the LECOM Suncoast Classic. He finished 32nd and won $3,690. Then he failed to make the weekend at the end of the month at the El Bosque Mexico Championship. Then, after the tour resumed in June after its pandemic pause, he missed the cut at the Korn Ferry Challenge. And at the King & Bear Classic.

And for the next 20 tournaments after that. Until, he didn’t. On Friday, on the leaderboards at the Glen Club, there was the cut line, at 2 over. And there was Guthrie, at even par. He had made a cut for the first time in 23 tournaments.

Afterward, a Korn Ferry Tour official began a question with: “I know it’s been a struggle …”

But how are you feeling, Luke?

His answer was as deep as his pizza crust.

“It’s been by far the most difficult time in golf, the least amount of fun in golf I’ve had in my whole life,” Guthrie said. “It’s been tough. Feeling close, people telling you you’re close, it’s right around the corner, and you just keep shooting the same score every day. And it’s not for a lack of hard work. The hardest thing about this game is you got to be committed to something. You got to commit to something. It doesn’t necessarily mean that you’re going to have results that next day, and it’s rare that you do. And it’s so hard when you’re struggling to this degree. You know it’s a process and you got to commit to something and give it time and then when you’re not seeing results, you start asking questions and stuff.

“No, it feels amazing. It feels amazing to be able to tee it up tomorrow. Hoping this kind of frees me up because, honestly, as bad as it’s been, I don’t shoot high scores; I just keep shooting one over to one under every round. And that’s been the most frustrating thing. And the last three weeks, I’ve been hitting a lot of good golf shots, starting to hit better putts, and there’s plenty that I can clean up, but it just felt like the tide was turning a little bit.”

It’s been by far the most difficult time in golf, the least amount of fun in golf I’ve had in my whole life.

Guthrie was accurate over his frustration — over the 23 tournaments, he’s averaged 72.7 strokes per round, or one over to one under. He was one under on Thursday and Friday, too, but this week, that tied him for 12th.

How’d he get through the past year-plus?

“My wife, Kaitlyn, has just encouraged me every step of the way,” he said. “Been there for every low moment that it’s been lately. Like when you convince yourself that this is going to be the day, you know every day, and I’m going to get off the schneid, and it just kept building and building and it just became its own little animal kind of thing.

“She was there every step of the way and just — life’s been great, that’s the best part. If this was me a decade ago where golf defined me a little more — if I had a bad day on the course, then I wasn’t happy till I had a good day almost. I confidently say that’s not the case. I was still a happy individual except it’s no fun to be bad at your job kind of thing, and it wasn’t out here. But my wife was there, just my family, my friends, just getting a lot of texts every week, just, this is it, you got it, come on. Just kind of reminding me of some of my old stuff that I’ve done and accomplished.”