Is the Masters or the U.S. Open the best major championship? That's Debatable

Which golf hole is better? No. 12 at Augusta or No. 7 Pebble Beach: That's Debatable

Is it a better accomplishment to get a hole-in-one or an albatross? That’s Debatable

That's Debatable grand finale: Which is better, No. 17 at Sawgrass or No. 16 at Scottsdale? 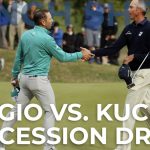 In GOLF’s all-new series That’s Debatable, sponsored by Cisco WebEx, we’re settling some of golf’s most heated disputes. Our writers and editors have been seeded 1-16, battling head-to-head to determine whose takes are most on point.

We’re down to the final four in That’s Debatable, and the stakes and takes are rising in lockstep. In the first matchup, our argument is centered around a point of personal preference: match play vs stroke play. In other words, is it better to compete against an opponent or against yourself?

On match play’s side is GOLF’s largest remaining underdog, 11-seed Alan Bastable. Bastable is up against the 2-seed, stroke play defender Michael Bamberger. You can watch their debate in the video above or read their arguments below.

Stroke play! Bastable’s Cinderella run ends in the final four, while Bamberger heads on to the final round of the GOLF staff bracket. Keep it locked on GOLF.com and @GOLF_com on social media to follow along as “That’s Debatable” continues every day at noon!