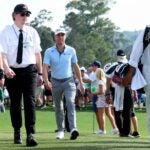 Justin Thomas is still looking for his first green jacket.

This week, we’re bringing InsideGOLF members exclusive insights and observations from the grounds at Augusta National to give you the latest from our team of tapped-in writers. Here’s what our squad saw and heard on Masters Tuesday.

At most tournaments, it’s good to be Justin Thomas, but at this tournament it must be really good.

The 7th-ranked player in the world is among the favorites to win, of course. But for reasons beyond just his talent, it feels like he has an edge this week. Reason No. 1: He’s pals with Tiger Woods. No. 2: His caddie is Jim “Bones” Mackay.

The trend of Thomas squeezing juice out of Augusta National legends has been so visible that others might be getting jealous: “I think there’s only one man in this field that hears advice from Tiger, because I’ve asked before and I get nothing,” Jon Rahm said Tuesday. He began to laugh. “So you might need to ask Justin Thomas because I’m not.”

More Rahm, just a few seconds later: “I asked [Tiger] at Albany once about chipping into the grain. ‘You just got to be shallow.’ Okay. Meanwhile, I turn around and JT is there with him, and he’s getting a whole dissertation on what to do.”

Rahm sees what we’re seeing: Thomas playing a practice round with Woods and Augusta savant Fred Couples on Monday; Thomas clipping chip shots next to Woods on Tuesday; Thomas meshing his insights with that of a three-time Masters-winning caddie the last few months. Oh, and Thomas following Woods’ footsteps when asked for the secrets he’s absorbed:

“To be perfectly honest, what I value the most, I’m not going to tell you because I don’t really want any of the other competitors knowing it.”

Why Tiger’s footwear is turning heads

Amid the unexpected positives about Tiger Woods’ game this week — and there are many — Woods offered a sobering reminder of his reality on Tuesday.

“Will I feel better? Yes, I will. I’m going to get stronger, and the whole limb will get stronger,” he said of his injured right leg. “But my movement probably will not get much better. With the rods and plates and screws that are in my leg…I have very limited mobility now with the hardware in there.”

Simply put, Tiger just can’t twist or turn or bend as much as he used to. And that fact has manifested itself in one unexpected way: in his choice of golf shoes.

Woods showed up at Augusta National this week wearing FootJoys — a stunner for a global superstar who has sported Nike head-to-toe for the past 26 years. His footwear selection, he said, was driven by his need for a shoe with more stability; FootJoys are uniquely suited to this because they have less cushion in the heel. That design keeps Tiger’s foot planted more flatly on the ground and therefore prevents his weight from shifting too much onto his toes, which allows him greater hip turn back and through.

So, is this the end of Tiger sporting swooshed shoes? Don’t bet on it.

“We’ve been working on trying to find something to allow me to do this and swing again,” Woods said of Nike. “Hopefully we’ll have something soon.”

When Phil Mickelson won his third green jacket, in 2010, he gleefully wore it through a Krispy Kreme drive-through the morning after his victory. Not long after Tiger Woods won his fifth green jacket, in 2019, he took it into the locker room at a Stanford football game to help fire up the troops.

And your defending champion at this 2022 Masters?

“I just spent a year looking at it,” Hideki Matsuyama said Tuesday from Augusta National, through his interpreter/manager Bob Turner. “And now I wish I would have worn it more.”

Call it winner’s remorse. Matsuyama said he did consider taking the jacket to the dry cleaners but even that prospect gave him pause.

“I just was so worried that something might happen to it,” he said.

This week, Matsuyama has other concerns — namely a stiff neck that has been hindering him since the Arnold Palmer Invitational early last month and which led him to withdraw from the Texas Open last week. “I haven’t really been able to hit a full shot, a hundred percent full shot in a long time, so that’s still a question,” he said.

Still, don’t short all your Hideki stock just yet. Matsuyama said the treatment he has been undergoing has been working, and his early-week practice sessions at Augusta have been pain-free. He has some other motivation, too.

“Last week in Texas it was a little sad because I knew that was going to be the last time that I was going to be announced as the defending Masters champion,” Matsuyama said. “It kind of made me feel, hey, I need to go out and win it again.”

Behind the Masters television ‘magic’

Masters television magic, it turns out, is not all that magical.

Standing inside the ESPN set at Augusta National is a bit like walking into a sauna with a group of strangers: It is immediately and abundantly clear that you’re the outsider in the group. That’s because the space is roughly the size of a college dorm. Nothing goes on at the set without everyone else knowing about it, as “SportsCenter” host Matt Barrie learned the hard way with me today.

“It’s 2006, there’s people around, and I’m beginning my round on the back nine,” Barrie said, retelling the story of his first round at Augusta National. “I was like ‘I’m gonna whiff. I’m gonna fall. I’m gonna slip. I’m going to do something really stupid and embarrassing.'”

The door opened behind us.

“I think you mean second nine, Matt,” Scott Van Pelt said, poking his head out the front door with a grin.

There’s no magic behind learning the Masters’ dialect, just as there isn’t any real magic behind Masters television. What makes it work is a group of hardworking folks occasionally having a little bit of fun.