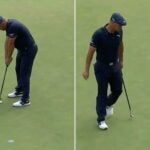 Bryson DeChambeau was *this* close to history. But as the old saying goes, close only counts in horseshoes and hand grenades. It makes no mention of golf.

DeChambeau lit Caves Valley Golf Club on fire during Round 2 of the BMW Championship, but ultimately, he came up one stroke shy of history. He settled for a 12-under 60 after missing from close range on the 18th green as he looked to become the 13th player to shoot a sub-60 round on the PGA Tour.

After splitting the 18th fairway with a patented Bryson Bomb, DeChambeau was left with just a wedge in from 144 yards. He executed the shot to perfection and zipped his ball back to within six feet of the cup, the perfect opportunity for 59.

But his read lined him up outside the hole left, and left is where it stayed the entire way, never touching the lip of the cup. DeChambeau tapped it for a disappointing 60. Prior to the short-range miss, he was a perfect 16 for 16 inside of 12 feet. As he explained after the round, there were several missed opportunities throughout the round that could’ve made the difference.

“It’s just one shot,” DeChambeau said. “There’s plenty of holes where I could have made a birdie somewhere else not making it, I still executed a good putt just didn’t break the way I wanted it to. That’s all I could ask for.”