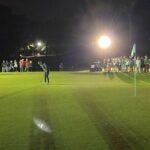 With two teams tied atop the standings at the Aramco Series after three rounds, their fate was decided by a playoff — in the dark.

OLD WESTBURY, N.Y. — Typically when darkness falls on a golf tournament, the horn is blown, and players retreat from the course until the sun rises again. At the Aramco Team Series – New York, that wasn’t the case.

As players holed their final putts in waning light on the 18th green of Glen Oaks Club on Saturday evening, the team leaderboard showed a tie at the top. Both Team Jessica Korda and Team Sophia Popov finished the event at 41 under — and a playoff would be needed to decide the crown.

Monday finishes — or in this case, a Sunday finish — are the bane of anyone involved with a golf tournament. No one wants to come back to the course early after a week of hard work — players included. You can count officials of the Aramco Team Series in that camp as well.

Despite the dark of night descending over the grounds, officials made sure a team champion would be crowned before anyone went home. As the last players trudged in from the course, maintenance workers wheeled out massive flood lights to the par-3 17th tee box and green. The playoff would take place in the dark.

Popov and Korda hopped into shuttle carts and were wheeled out to the tee box. The two joked with each other and other players about the absurdity of what was about to take place. Korda pulled out her phone and recorded a goofy video with Popov as they giggled in the darkness.

The in-the-dark setting presented a few issues, namely seeing the ball. Popov and Korda had to request for a repositioning of one of the lights on the tee box to get a better glimpse of their balls just feet from them.

“I can’t see anything,” Korda laughed as she took practice swings on the box.

But when the order of play was determined and Popov stepped over her tee shot, the competitors in the ladies came out once again. Both badly wanted the title — for themselves and their teammates — and an odd setting didn’t change that.

Popov hit her tee shot first, into the dark abyss. For a few moments after she struck the ball, no one knew where it would end up. Suddenly, a cheer came from the green. The ball was safely aboard the putting surface.

Korda cooked her shot long and near the grandstand, and the pair bounded down the hill toward the glowing green. A champion would come from this group, even if it took all night.

With Popov some 25 feet from the cup, Korda surveyed her shot from the rough long of the green. She walked onto the putting surface to get a glimpse of the contours it, but when she looked back to where her ball sat, the floodlight blinded her vision.

“Where are you?” Korda asked her caddie, who stood next to the ball.

After Korda chipped onto the green and two-putted for bogey, Popov needed just two putts for victory. But after leaving her first putt five feet short (it can be difficult to read the green in the darkness), she left her par putt outside the hole, necessitating a march back to the tee.

Once back on the tee, the two readied to hit. However, standing in the middle of the hole was a hoard of fans.

“Please clear the fairway!” an official yelled out.

Rope barriers cease to have the same power in the dark of night.

“This is the craziest thing I’ve ever seen,” one fan remarked.

Again, the two took turns hitting tee shots, but this time, it was Korda who found the green while Popov flared her shot into the bunker.

As the two surveyed their shots, the crowd encircled the green. Long shadows cast their shapes all over the poa annua surface, as Popov blasted her ball 12 feet short of the cup. Korda easily two-putted, and it came down to a putt for the major winner to extend the playoff once again.

Alas, there would be no third hole in the darkness. Popov’s putt slid past the hole, and Team Korda claimed the team crown.

“You ever seen anything like that?” a Ladies European Tour official asked me.

Never in my life.