She set the course record at a major. But that alone doesn’t capture her utter dominance 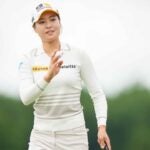 In Gee Chun shot a course-record 64 at Congressional on Thursday.

BETHESDA, Md. — In Gee Chun looked like she was playing a different course than the rest of the field on Thursday.

On a day when a long, wet Congressional Country Club played like a true major-championship test, Chun was unbothered. The two-time major winner carded nine birdies (and just one bogey) in her opening round at the KPMG Women’s PGA, turning in a course-record 64 to set the early pace in suburban Washington D.C.

“I’m happy with the good round today,” she said. “I didn’t think about all the history from the course today. I just keep going to make birdie as much as I can.”

Good round? It was nothing short of dominant. Of the 90 players in the morning wave, no other contestant shot better than one under and the scoring average was a tick over 76.

Starting on the back nine in the soggy morning wave, Chun started one-under through five holes, but starting on the 15th hole, she took her game to another stratosphere.

The 27-year-old ripped off four birdies in a row to close out her opening nine, making the turn in 31 to jump out to an early lead over the rest of the field. Even as the lengthy setup forced a variety of hybrid and long-iron approaches into greens, Chun kept giving herself makable looks.

Really, every club seemed to be working.

Chun bogeyed the 1st to momentarily stall her progress, but bounced back with another unconscious stretch, carding circles on Nos. 2-4. She added another bird at the 7th and avoided dropped shots the rest of the day for a course-record 64.

It was a dazzling number, but it was the play from the rest of the field — and the difficulty of the course — that elevated Chun’s round to epic status.

“I don’t know what golf course she’s playing,” said Hannah Green, who shot a one-under 71 in the morning wave. “We were looking at the scores, and we were, like, ‘Oh, wow, okay, five under par. But still tough on the back nine.’ To hear that she’s eight [under], I’m, like, ‘Wow, that’s impressive.’ That’s like shooting 10-under out here.”

Besides the major-championship test that Congressional presents (its Blue Course has hosted four previous majors), the conditions on Thursday didn’t make things any easier.

Overnight storms in the D.C. area soaked the course with two inches of rain, and players in the early wave contended with intermittent showers as well. Many expected tees to be moved up as a result, but when players arrived at the course for the opening round, they were greeted with 6,809 yards of torment.

Chun was unfazed. Her tally bested the morning-wave scoring average by 12 strokes.

“Sometimes In Gee does that,” said Brooke Henderson after shooting 71 in the morning wave. “Sometimes she just plays so well, and nothing bothers her. It’s really cool to see.”

Not only did Chun’s round set the scoring record for Congressional’s Blue Course but it also tied the low opening round in Women’s PGA Championship history.

“The course is really hard,” said Jennifer Kupcho after a 71 of her own. “I don’t really know how In Gee is eight under right now.”