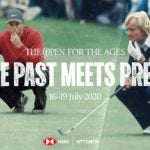 The Open for the Ages is set to broadcast Sunday starting at 6:00 a.m. ET on the R&A YouTube channel.

It’s golf’s greatest hypothetical. If Tiger Woods, Jack Nicklaus and two dozen more of golf’s greatest players battled it out at the Old Course at St. Andrews, who would win?

Now, it’s no longer a hypothetical.

The Open for the Ages, as its called, is using the archival footage to pit 20 of golf’s greatest players against one another in a faux tournament at the Old Course at St. Andrews.

Producers utilized a statistical regression of players’ Old Course stats alongside a fan vote to determine the winner and leaderboard for the event. Then, they edited together the archival footage to resemble a real-life final round broadcast, digitally altering grandstands, players and even the pigment of the St. Andrews grass to provide a realistic feel for viewers.

After more than 1,000 hours of editing between the R&A and IMG Productions, the final product is available to fans on the R&A’s YouTube page starting at 6:00 a.m. ET on Sunday, July 19 (you can watch the entire, three-hour final round at the link here).