How to ‘Bryson-proof’ a golf course, according to Bryson DeChambeau 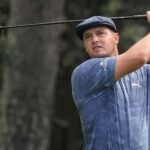 How exactly does one “Bryson-proof” a course? It depends on who you ask.

What’s the best way to combat distance? That’s been the million-dollar question in golf lately, especially since the USGA’s Distance Insights Report was released last year.

The trouble with that question is there’s no definitive answer. Some argue for rolling back the ball, others for shrinking the size of the drivers. There’s also the school of thought that thinks gnarly rough and tight fairways is the way to go. The truth is, there’s likely no one-size-fits-all solution to this problem. It’s a nuanced issue with far too many layers for one single band aid to fix.

At the forefront of this distance-suppressing debate is Bryson DeChambeau. The beefy 27-year-old has commanded the attention of the golf world over the past year as he’s bulked up and started Hulk smashing drivers with reckless abandon. Everyone in golf has gotten longer as time has progressed, but DeChambeau has pushed that to the absolute limits.

His bombs got the golf world talking over the summer, and by the time he dismantled Winged Foot on his way to the U.S. Open title, there were talks of having to “Bryson-proof” courses to stand up to the might he possesses.

How exactly does one “Bryson-proof” a course? It depends on who you ask. According to DeChambeau though, it won’t be easy.

“You look at those golf courses that are more short, tight, whatnot, and even East Lake where you have a bunch of cross-bunkers in front of the green, you look at those types of golf courses, that’s really the only way to combat it on any level,” DeChambeau told reporters on a call ahead of the Saudi International. “(But) no matter what, you really can’t combat the distance.  You can kind of control it a little bit with setting up cross-bunkers short of the green where you can’t run stuff up like I could at the U.S. Open at Winged Foot.”

We saw at Winged Foot what a long course with narrow fairways and long rough does to the field. Instead of punishing the long bombers for errant drives, it worked in their favor. When they missed fairways, they still had short clubs into the greens to chop it out of the rough. When short players missed the fairways, they were left with impossible shots out of the cabbage with long irons. Advantage DeChambeau.

Cross bunkering is a way to prohibit running the ball onto the greens from the rough, but even then, the bombers will still have an advantage. Distance will always be an advantage, and there likely isn’t one solution to fix the problem.

If that’s the case, expect DeChambeau to add to that major total in the years to come — “Bryson-proofed” or not.

Want to max out your driving distance in 2021? Get a custom driver fitting from the expert fitters at our sister company, True Spec Golf.