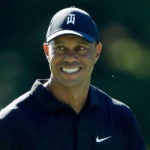 Like the rest of us, Tiger Woods' routines have changed during the coronavirus pandemic.

Tiger Woods was back in front of a microphone Tuesday morning, following a practice round alongside Justin Thomas at Muirfield Village (the two played the back nine). This was Woods’ first real press conference since the coronavirus pandemic swept across the U.S. — while he made a couple appearances at the Match II and alongside Jim Nantz on the anniversary of his Masters win, we’ve not seen nor heard much from the 15-time major champ. So this was a chance to pepper him with questions on golf’s current events and listen to what he said (and didn’t say!) about what he’s been up to.

So how did Tiger Woods spend quarantine? Let us count the ways.

Woods revealed that he’s been relatively dialed in to the Tour’s on-course action and sung the praises of two of the PGA Tour’s young stars, Viktor Hovland and Collin Morikawa, who were each in the final group on Sunday at the Workday Charity Open (which Morikawa went on to win).

Tiger’s take: “Man, those two in particular have just such bright futures ahead of them. They both hit the ball great. Short game is only going to get better. Their putting is only going to get better over time. And don’t forget, when you’re a rook like those two were last year, it’s trying to get to know the golf courses. That takes a couple years here and there, and before that starts kicking in, generally you see guys start playing a little better in the second, third, fourth year after it’s gone around the rotation and they’ve seen these venues.

What he didn’t say: “Still, I was way better at their age.”

Woods said that he’d considered coming out earlier in the Tour’s restart but ultimately decided to see how things played out from the safety of his home. One thing was clear from several of his answers: Woods is taking the virus seriously and has been doing his best to steer clear of other people.

Tiger’s take: “I’m used to playing with lots of people around me or having lots of people have a direct line to me, and that puts not only myself in danger but my friends and family, and just been at home practicing and social distancing and being away from a lot of people.

“Coming back and playing the Tour … I’m used to having so many people around me or even touch me, going from green to tee. That’s something that I looked at and said, well, I’m really not quite comfortable with that whole idea.”

What he didn’t say: Whether he was cracking up as people scrambled to track his yacht and make predictions based off its location along the eastern seaboard.

It was particularly interesting hearing Woods break down the differences that come with a fan-free Tour. He said he was watching last weekend’s playoff from his computer and noted that, when Justin Thomas and Collin Morikawa drained back-to-back birdie bombs on 18, it would have typically brought the house down.

Tiger’s take: “To see J.T. make that putt, he’s screaming, but no one else is screaming. And then when Collin makes it, normally — he didn’t have that much of a reaction, but the whole hillside on 18 would have been just erupted. I’ve been there when they’re throwing drinks towards the greens and people screaming, high fiving, people running around, running through bunkers. That’s all gone. That’s our new reality that we’re facing.”

What he didn’t say: Just how much of a bummer it is to see that hillside empty by 18 green. Also, whether he’s a Mac or PC guy.

4. Working on his body

Woods didn’t look quite right at Riviera in February, but he claims the layoff was helpful in getting him back into proper physical form.

Tiger’s take: Well, physically I was very stiff at LA. I was not moving that well. Back was just not quite loose. It was cold. I wasn’t hitting the ball very far, wasn’t playing very well, and consequently I finished dead last. Fast forward five months later, I’ve been able to train a lot…I feel so much better than I did then. I’ve been able to train and concentrate on getting back up to speed and back up to tournament speed.”

What he didn’t say: Where that speed stacks up compared to the ridiculous distances guys like Bryson DeChambeau, Tony Finau and Cameron Champ are hitting the ball.

We know Tiger and his son Charlie like to watch a good tennis match. We didn’t know how much they’d gotten to play — until now.

Tiger’s take: “Well, there’s a lot of things that I hadn’t done in a long time, and one was sport-wise and physically is that we were playing quite a bit of tennis. That was very different and something I hadn’t done in a very long period of time because I hadn’t been able to do it physically. The kids enjoyed it. We were able to do that in the backyard.”

What he didn’t say: Whether he’s getting his game ready to take on Rory McIlroy, who said upon his return to golf that he’d been spending more time on the courts than on the course.

That’s right, reading as in — actual books. While Woods didn’t say whether he’d checked out my colleague Michael Bamberger’s new book about him, he said he’d been spending plenty of time at home watching TV and flipping pages. This came as an answer to my question to Woods, which meant I was faced with a dilemma — with one follow-up question, should I ask about the books or the tennis game? I went books. Second-guess as you please.

Tiger’s take: “One of my favorite authors, Dean Koontz, California guy, horror novels. So I read a few of those.”

What he didn’t say: Which Koontz titles he’d been browsing.

We’ve all been doing this. It’s logical that Woods has been, too.

Tiger’s take: “What Bryson has done is no easy task. He’s got to put in the time and has put in the reps, and he’s figured it out. He’s gotten stronger, faster, bigger, and has created more speed. But more importantly, he’s hitting it further, but let’s look at the fact that he’s hitting it as straight as he is. That’s part of the most difficult thing to do. The further you hit it, the more the tangent goes more crooked, more along this line. So the fact that he’s figured that out and has been able to rein in the foul balls, to me, has been equally as impressive as his gains off the tee distance-wise.”

Yeah, there has been some golf, too, at Woods’ home course in south Florida.

Tiger’s take: “We’ve been lucky enough to have had Medalist open at home for most of this quarantine period. So it’s been nice to get out on the golf course and be able to play and keep active that way.

What he didn’t say: Who’s been bringing home the bacon in these Thomas-Tiger showdowns.

9. Plotting his next victory

It’s logical to expect some rust from a guy whose last stroke play event came in February — where he finished dead last on the weekend. But that doesn’t mean Woods is cutting himself any slack. After all, his last tournament layoff preceded a victory at the Zozo Championship last fall. So could he win this week?

What he didn’t say: “Y’all should know better than to ever count me out.”

Remember Rio? A brief recap of the 2016 Olympic golf competition