What now? How Team Europe’s Ryder Cup system broke down 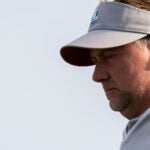 The European team's troubles aren't caused by its generals, but its lack of lieutenants.

HAVEN, Wis. — World War II general Douglas MacArthur once said that generals are only as good or as bad as the troops under his command make him. There’s a parallel that tracks between MacArthur and the current European Ryder Cup affair.

The 2021 European Team had no shortage of generals. Stalwarts like Lee Westwood, Ian Poulter, and Sergio Garcia. World No. 1 Jon Rahm and Rory McIlroy are undoubtedly the now-and-future leaders of this team, too, despite the latter’s struggles this week.

Generals are not the issue for this European team. It’s the lieutenants — or lack thereof. The class of golfers who could one day be tapped for a leadership role, but until then are will serve an essential supporting role upon which the rest of the system relies. It’s a system, intentional or not, that they’ve had for decades.

Europe has never had a Tiger Woods or a Phil Mickelson; best leave that fanfare to the Americans. Rather, they cultivated an attitude of togetherness throughout the ranks. There has always been a stout collection of golf’s next best: late 20s to mid 30s, one-major, four-to-five career Ryder Cup appearance, mid-peak types of players. Darren Clarke, Miguel Angel Jimenez, Graeme McDowell, Luke Donald, Justin Rose, Henrik Stenson. These players formed a stiff middle to the team, equally able to form partnerships among themselves, play supporting roles for others, sit out sessions without raising any eyebrows, or stand toe-to-toe when the time came to play singles. It was a strategy forged of necessity, but one that became essential to Ryder Cup success.

Now that the dust has settled on this Cup, there seems to be only a handful of players who fit the mold: Shane Lowry, Tyrell Hatton, and Tommy Fleetwood. And interestingly, all played an important role in the last two Cups: Lowry and Hatton this week and Fleetwood in spades three years ago.

The issue is that that there’s not much beyond that, because those who should be around have gone missing.

Three of Europe’s last six major winners: Francesco Molinari, Danny Willett, and Martin Kaymer should all be primed for this role. Rafa Cabrera Bello, a once-trendy dark horse major pick who impressed at Hazeltine, isn’t far behind. Matt Wallace, whose form ahead of the 2018 contest had some clamoring for a captain’s pick, seems further away than ever. It has left the European team in an unenviable position of needing to default to the old guard once again.

Try as they might, it was one battle too many. It was the opposite of the problem during Europe’s last loss in 2016, but of the six rookies on that team at Hazeltine, only one of them — Matt Fitzpatrick — made it to Whistling Straits.

Young upstarts often arrive out of nowhere and with pleasant surprise. The U.S. team is full of them this time around, and Viktor Hovland is perhaps the best example on the European side. There are already potential rookies you can see coming down the European pipeline: Sam Horsefield, Robert MacIntyre, the Hojgaard brothers.

But Europe can’t depend on something that isn’t there yet. That’s what the bridge group of players is there for — or should be there for. Without them, the system crumbles against an American squad that has reloaded on its own. Forming a legit enough roster to compete with this U.S. team could take years. Ian Poulter and Lee Westwood have served their time honorably, but shouldn’t need to be depended any longer.

Their intended successors have gone missing, turning the European team’s stiff middle into a soft underbelly.