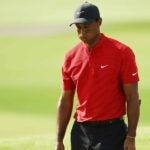 Tiger Woods' 10 on Sunday at Augusta National was costly in more ways than one.

Mistakes in golf are costly. But some, it seems, are more costly than others.

As you’ve no doubt heard by now, Tiger Woods made a series of consequential mistakes in very short order on Sunday at the Masters. On No. 12, the same hole where Tiger’s green jacket dreams gained license in 2019, his chances at Augusta National shattered. Nineteen months after Francesco Molinari dunked his tee shot on No. 12 into Rae’s Creek, Tiger Woods followed suit — three times.

When the dust settled, Tiger had recorded a mind-bending, round-destroying septuple-bogey 10. He dropped from safely in the red to deep in the black.

After the round, he explained the misunderstanding that triggered the debacle.

“I committed to the wrong wind,” Woods said to Amanda Balionis later on. “The wind was off the right for the first two guys. When I stepped up there it switched to howling off the left … I didn’t commit to the wind and I got ahead of it and pushed it, too. … That just started the problems. From there I hit a lot more shots. Had a lot more experiences there in Rae’s Creek [laughs].”

Even as his score piled up, Tiger had no choice but to grin and bear it. There are no pick-ups in tournament golf, and particularly not at the Masters.

Still, mistakes have consequences, and for Tiger, it seems we can say exactly how costly his Sunday slip-up was. Including the 10, Tiger finished the weekend at one under, in a tie for 38th place. His payout is a modest $50,600, not bad for a weekend’s work. But had Woods simply made par on the 12th hole on Sunday, he would’ve finished at eight under and in a tie for 13th. In that case, his payout would’ve been $215,625 — or $165,025 MORE than he made.

While that’s a drop in the bucket for a golfer who’s earned as much money as Tiger Woods has throughout his career, it’s certainly nothing for the rest of us to turn our noses at.

The real lesson here? The next time you wonder just how much better your round would’ve been if not for that ONE blowup hole, be glad you can’t assign a dollar amount to it.