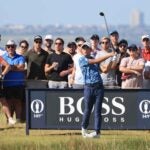 The winner of the 2021 Open Championship will come away with a hefty paycheck.

The 2021 Open Championship purse reached a record high this year, increasing by $750,000 to $11.5 million — three-quarters of a million more than the last time the championship was played in 2019, when the total purse was $10.75 million.

This year’s Open champion will surpass the payout received by the 2019 champion, Shane Lowry, by $135,000. Lowry pocketed $1.935 million for his win at Royal Portrush, and this year’s winner will receive a whopping $2.07 million at Royal St. George’s. The runner-up will also easily clear seven figures, with a hefty payout of $1.198 million.

So how much did the rest of the players in the field come away with this year? You can find a complete list of the 2021 Open Championship payout for each player below.

How much money every player made at the 2021 Open Championship