How fast are Augusta’s greens? This water bottle story may stun you 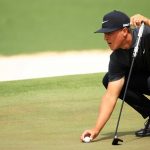 Cameron Champ lines up a putt on Sunday on the 2nd hole at Augusta National.

Augusta National’s greens are always fast. During Masters Week, they get faster. On Thursday, GOLF’s Dylan Dethier talked to a few superintendents who said the greens were dried out a bit. In other words, one of Augusta’s best defenses was fully armed. The greens might have even been at their fastest.

“Maybe late Sunday afternoon you see them this firm, but I’ve never seen them on a Monday that firm,” Brooks Koepka said after his two-over 74. “Monday it kind of looked like what it does normally what it does on a Saturday, late Saturday afternoon, Sunday. But definitely not — there’s not much grass on a couple of those greens. On the back of 6, there’s no grass, and 9, I don’t know if there is grass.”

“The golf course was — oh, my God, I’ve never seen it like that, which was great,” Shane Lowry said after his 71. “I loved it. I’ve always wanted to play Augusta like this in the Masters, firm and fast and putts getting away from you. Even though I had a 15-footer on 8 there, chance for birdie, and you’re just trying to lag it down to the hole. Same on 17. Yeah, it’s not very enjoyable when you’re doing it, but when you look back on it, it’s like, yeah, that was pretty cool.”

“Wow,” Ian Woosnam, the 1991 champ, said after his 76. “I didn’t play yesterday. I just did some chipping and putting and hit a few balls, and I went on that first green, and I thought, what’s happened here? It was just like — it looked like glass.

“If it dries out this afternoon, it wouldn’t surprise me to see them have to put some water on the greens.”

In 2007, Greg Norman did just that. Just how fast do those greens get? Norman, playing with Adam Scott, found out.

During a practice round, Scott and Norman each hit their tee shots to the sloping green on the par-3 16th. The Augusta greens were playing particularly fast that year, too. Apparently, they held less than golf balls.

“I actually remember being on the 16th green with Greg Norman and poured some water on the slope and the water just trickled all the way across and off the green,” Scott said. “It never got absorbed. That stood out for me.”

Scott, during his pre-tournament press conference, said during a typical week, Augusta will slowly put its foot on the grass gas. Monday, Tuesday, Wednesday they’re one speed. Tournament time they become another. “Then they cut your legs out from under you on Thursday and you’re scared every chip shot and all of a sudden downhill putts are running to the edge of the green and stuff like that,” he said.

On Friday this year, players said the greens slowed a touch. On Saturday, after an hour-plus under the rain, they slowed again, and Hideki Matsuyama rode them to four birdies and an eagle in a six-hole stretch on his way to a four-shot lead entering Sunday.

In the final round, with a green jacket on the line, the greens will no doubt have some jump again.