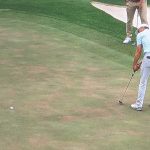 Augusta National looks different this year. Gone are the lush, green, soft fairways of November. We’re in the midst of an unseasonably warm spring — one following a Masters where the winner just shot 20 under — so in a masterstroke of its own making, Augusta National baked the greens.

They were a beautifully brutal combination of green, brown and purple. Fans took to social media as the images hit the airwaves to voice their approval — and their terror at imagining putting on them themselves.

Across the pond, on Sky Sports, LPGA legend Laura Davies demonstrated the terrifying speed of the greens during the broadcast.

And Masters legend Jose Maria Olazabal, for his part, lavished praise on the conditions, saying they reminded him of how Augusta National used to play in the 80s and 90s.

“It’s lovely to see Augusta played like we have the last two days, fast and firm.  It reminds me a lot of the late ’80s and ’90s,” he said. “Around the greens and on the greens, it’s extremely demanding.  You need to have great touch, and on top of that, a lot you have to think about when you hit your second shots on to the green, depending on where the flag is, where to attack it, which angle to attack it from.”

With rain expected before the end of the tournament, it’s possible we’ll see the surfaces soften-up, but with the reviews so positive, perhaps we’ll see a return to the 80s and 90s style Augusta more in the future.