‘How disappointed do you think I am?’ Brooks Koepka misses Masters cut 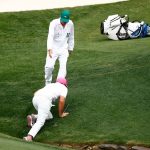 Brooks Koepka crawls out of the hazard on the 13th hole at Augusta National on Friday.

Brooks Koepka wouldn’t continue his streak of 24 straight cuts made at majors, he wouldn’t play the weekend at the Masters, and he most certainly wouldn’t win his first green jacket. He had also said he wouldn’t be at Augusta National if he thought he couldn’t. Koepka arrived essentially on one knee — or, at best, two repaired ones — after undergoing surgery on his right one just a few weeks ago.

So Brooks, the reporter asked Friday, how disappointed are you.

“How f—— disappointed do you think I am?” Koepka said. He let out a quick laugh.

“I worked my ass off just to get here, and then to play like this is pretty disappointing.”

Koepka, in early March, underwent surgery to repair a kneecap dislocation and ligament damage in his right knee. On Sunday, he was at Augusta. During his practice rounds and his first and second rounds, he’d seek flat ground — much easier said than done at undulating Augusta — and he’d awkwardly extend his right leg out while crouching down to read putts in order to alleviate any stress on the knee. Ahead of the golf, he said Tuesday, “it took about three hours this morning just to get going, and I didn’t finish last night until about 12:30 or so.” All of this, too, follows a lengthy recovery from a left knee injury originally suffered in late 2019.

Koepka wouldn’t fault his knee. “Ball above your feet, downhill lie” shots were the only concern, though there was a concerning moment when he hit from the hazard in front of the 13th green, then immediately grabbed his leg before crawling out. Still, he admits he wouldn’t have played had the Masters not been a major.

“I wouldn’t have been playing for another month if it wasn’t this week,” he said. “So I’ll take a nice long break after this. Way I look at it, I have two more days to do rehab that I probably wouldn’t get if I was out here.”

Next is the next major, the PGA Championship, which starts May 20 in Kiawah Island, S.C. Koepka’s a two-time winner of the event, and he twice emphasized Friday that he wouldn’t miss it.