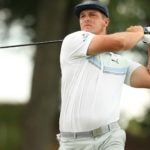 Bryson DeChambeau has the golf world buzzing over his length off the tee.

Bryson DeChambeau’s new brutish approach to the game has been the talk of the PGA Tour since golf’s return. For better or worse, it seems that it’s nearly impossible to get through a week without DeChambeau’s name coming up in headlines, whether it be for controversy or innovation.

One of these headlines came as a result of DeChambeau’s rumored plans on how he aims to conquer Augusta National this fall — specifically the famed par-5 13th. We’ve seen bombers and modern equipment somewhat neuter the dogleg left hole in recent years, but none of them have taken on the bold strategy that DeChambeau suggested.

At just over 380 yards to reach the 14th fairway, it’s not out of the realm of possibility for DeChambeau to actually employ this attack. Plus, hitting into the 14th fairway would give him a more level lie than what the dramatically sloped 13th offers, and the angle into the green is favorable as well.

But as we know with Augusta, they are willing to make changes to protect the golf course, such as the Tiger proofing that took place in the early 2000s. Could we be on the verge of a Bryson proofing in the near future? Former Augusta Chronicle golf writer Scott Michaux floated a distinct possibility on Twitter that could foil DeChambeau’s plot.

The addition of trees in between the 13th and 14th would not be a dramatic change, but it would limit the options that bombers like DeChambeau have off the tee. If the trees were added, DeChambeau would have to carry his tee ball nearly 400 yards to clear a towering pine tree. While he’s a long hitter, he’s not that long.

Augusta is one of the most tight-lipped clubs in the world, so don’t expect any announcements on impending changes. We’ll all just have to wait until November.