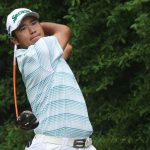 Hideki Matsuyama tees off on No. 14 at Augusta National during the third round of the 2021 Masters.

In 2019, the Masters released the richest purse in tournament history: $11.5 million. And for both the 2020 November Masters and this year, 2021, that amount remains unchanged.

So how does Masters money compare to the other major tournaments on the PGA Tour schedule?

It turns out, the richest event on the schedule isn’t a major at all — it’s the Players Championship, which paid out the largest purse in tournament history in March — a whopping $15 million, with $2.7 million going to winner Justin Thomas. This year’s payout was a significant increase from the last time the tournament was played in 2019, when the purse was still a hefty $12.5 million, and winner Rory McIlroy took home $2.25 million.

After the U.S. Open, the Masters is next with its $11.5 million purse, followed by the PGA Championship, which doles out $11 million. Collin Morikawa pocketed $1.98 million when he won in 2020.

The British Open was canceled in 2020 because of the coronavirus pandemic, but the $10,750,000 purse in 2019 makes it the lowest of the four major championships. Shane Lowry took home $1.935 million for winning at Royal Portrush in 2019.