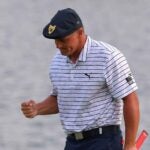 Bryson DeChambeau sits within striking distance on Sunday at the Players Championship.

The winner of today’s Players Championship will bring home a sizable potion of the largest total purse in PGA Tour history.

The total Players Championship purse is $15 million, with the winner bringing home a ridiculous $2.7 million. (In fact, the rich payout hands out at least a million to the top three.) It’s the same purse the Tour announced for last year’s 2020 Players Championship, although that never got paid out since the event was canceled.

The increased purse was first announced at the Tour’s annual players’ meeting in January 2020, according to the Associated Press. This will be the largest purse and winner’s share handed out in single tournament in PGA Tour history (not including bonus-rich playoff events).

While the $2.7 million to the winner is a monster payday, it’s not the largest on one of golf’s main pro tours. Matthew Fitzpatrick won $3 million at the European Tour’s DP World Tour Championship in December 2020.

Lee Westwood leads the 2021 Players Championship at 13 under after 54 holes. He’s in Sunday’s final pairing (1:50 p.m. ET) with Bryson DeChambeau, who is two back. DeChambeau and Westwood were also in the final pairing last week at Bay Hill, with DeChambeau coming out on top to win the Arnold Palmer Invitational.