How high school golf filled in for Friday Night Lights 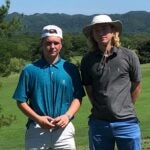 Repeat, Nick Ferrence, who plays golf casually over the summer, beat Neil LaRochelle, the returning conference champion and Maine Class C runner-up, in their first match of the season.

“I wasn’t gonna let that happen again,” LaRochelle says, as Ferrence snickers in the background. “Since then, I don’t think he’s beat me in a match.”

“I thought I had a good chance of beating him again,” Ferrence says. “And then he just smoked me in every other match.”

Golf, for a high school quarterback in a small town, was beginning to feel a whole lot like football.

Ferrence, a shade over 5-8, with ashy blond hair and blue eyes, is your typical teenager. In the summer, he does landscaping and mows lawns for extra cash. His favorite football player is Russell Wilson; both because he plays for his favorite team (the Seattle Seahawks), and because of their similar build — which Ferrence uses as extra motivation as an undersized quarterback himself. His team, the Lisbon High School Tigers, are the reigning Class D state champions, and Ferrence, a junior, was vying to be the starting QB.

In early September, Maine canceled his season due to the coronavirus.

Giving up football for golf wouldn’t be easy for Ferrence. No passes to streaking wide receivers down the sidelines. No cheering fans or smell of fresh-cooked popcorn wafting its way down from the bleachers. No Lisbon High, either. Ferrence, along with LaRochelle, attends Lisbon, but through a co-op program, he would play golf for St. Dominic Academy. Just him, a club and a ball.

And his best friend.

LaRochelle and Ferrence have always been friends; they grew up three doors down from each other in Lisbon. LaRochelle and Ferrence’s families have been close even longer. Now, on St. Dom’s, they played in Auburn, which rests in the south-central part of Maine. Auburn is picturesque and classically American; the Androscoggin River intersects the city’s long, sloping body, and in the fall, its golden and burgundy trees envelop the city’s 65 square miles.

Ferrence exchanged his pads for a putter, and his hometown for its neighbor.

`[LaRochelle] had been trying to talk me into [joining the team] for a couple years now,” Ferrence said. “And I’ve never really wanted to — I’ve always been 100 percent in on football. And then when I heard that I had the opportunity to play [golf] because football is getting canceled, I was all in.”

Ferrence was not alone this year. All across the nation, high school fall athletes whose seasons have been stripped from them have migrated to the golf course. In Limon, Colo., a group of football players even resurrected their school’s long-shuttered boys golf team.

Chris Whitney, St. Dom’s coach, once switched sports, too. From golf to football.

As a good coach would, Whitney helped Ferrence play football – on the golf team.

“When I was in high school, I played golf, and I was a golfer. But in middle school, there’s no middle school golf. So I played middle school football. And then I had to make that choice. But then I just missed the team sport aspect of it,” Whitney said. “So my senior year, I actually switched and went and played football, and he’s just doing the opposite.“

“So I told him, ‘Listen, my dad coached college football, he’s coached high school football, I grew up playing football, I’m still around it. In practice, we can go over techniques and blocking routes and drop backs and throwing and you can still play golf, and we can talk football at the same time.”

Recruiting Ferrence was more than just having his best friend with him on the team. LaRochelle knew Ferrence was good — they had played golf regularly over the summer together — and having him meant St. Dom’s had a better shot at winning state.

LaRochelle, a senior, said he’s angling toward trying to play golf competitively in college next year. Ferrence, meanwhile, is still undecided about whether his future includes golf or football. Boone, the golf liaison for the National Federation of State High School Associations, said most of these new golfers will likely return to the gridiron.

Auburn is the small town.

The high school quarterback in the small town is the thing

It just so turned out that it wasn’t the only thing.