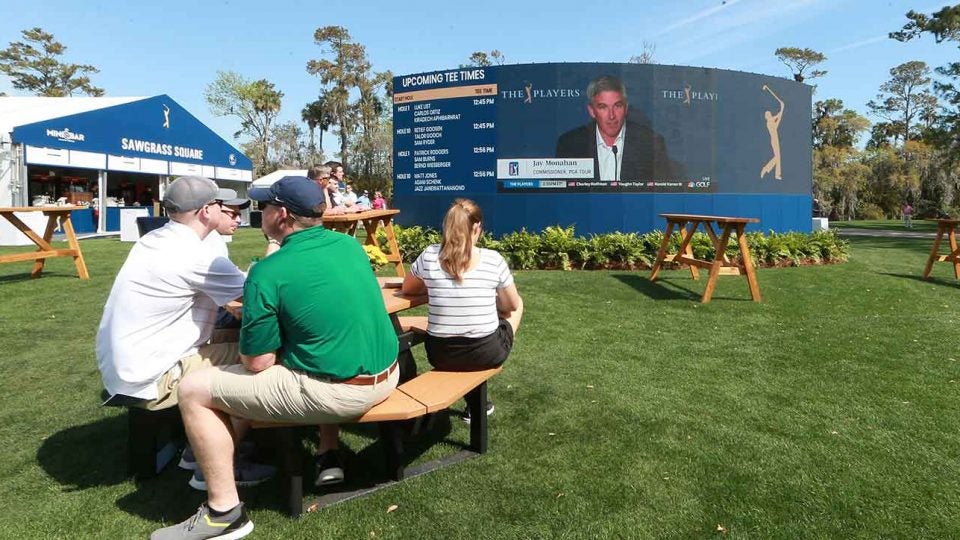 Fans look on in silence as Jay Monahan announces the PGA Tour's decision to bar fans from attending the Players Championship.
Getty Images

PONTE VEDRA BEACH, Fla. — At 8:30 on Thursday morning, a husband and wife in their early-30s stood a stone’s throw from the tenth tee at TPC Sawgrass. Phil Mickelson, Dustin Johnson and Webb Simpson were moments away from teeing off to begin their round — the first star-studded group on the first day of the Players Championship. Gaps of sunlight burst through the Spanish moss dangling overhead, partially illuminating their faces.

Neither the man nor the woman said a word as the three golfers teed off. It wasn’t until they turned to walk down the side of the fairway that the woman asked the question soon to be on every golf fan’s mind: “So, what’s happening with the Masters?”

The husband turned back to his wife and said, “Ahh, it’s nothing. Tiger’s definitely going to be back in time.”

By 11:30, word had spread among the gallery at the famed 17th hole. In half an hour, commissioner Jay Monahan would be staging a press conference to announce the PGA Tour was closing the remainder of the Players Championship from the public.

The announcement (and subsequent acknowledgment that events would be played only for television audiences until at least the beginning of April) was a devastating blow for the PGA Tour. Questions remain about the viability of fans at events for the remainder of the 2020 season, particularly, at the Masters. Augusta National is rumored to be releasing a statement on the issue sometime next week, with the very real possibility of playing golf’s first major without patrons.

After the initial tremor of Monahan’s announcement, aftershocks of frustration, disappointment and concern echoed through the stadium seating at 17. The wide berth of fans who showed up to Sawgrass hours after a series of consequential developments in the global spread of coronavirus struggled to make sense of the Tour’s decision.

Eerie scene at the pavilion near the 18th green at the Players Championship. The few gathered stand in stunned silence as PGA Tour commissioner Jay Monahan announces all events will be played without fans until April, effective tomorrow. pic.twitter.com/71QSU4MJTK

One fan, Allen Toole of Cape Girardeau, Mo., whose wife Anita purchased a grounds ticket for day one of the tournament as a Christmas gift, said the surge of cancellations and prohibitions across sports and beyond are going to have significant ramifications. “I feel like we’re inflicting more harm than the virus itself,” he said.

“It’s very subdued out here,” said Scotty Jones, a course marshal in his second year at the tournament. “Honestly, I think these people are in shock. With everything going around I think people are just cautious.”

“We were going to go all weekend, we’re bummed,” said Dan Honan of Portland, Maine, who purchased week-long passes with a group of friends to celebrate his 60th birthday. “This is weird, isn’t it?”

Weird it was. Especially for those, like Jud Bennett and Teddy Welch, who had friends and family competing this weekend. Bennett drove seven hours from Birmingham, Ala., to watch his former high school teammate, Sepp Straka, play in his first Players Championship.

“It sucks,” Bennett said. “It seems like a decision they made cause everybody else is making it. That’s the frustrating part.” 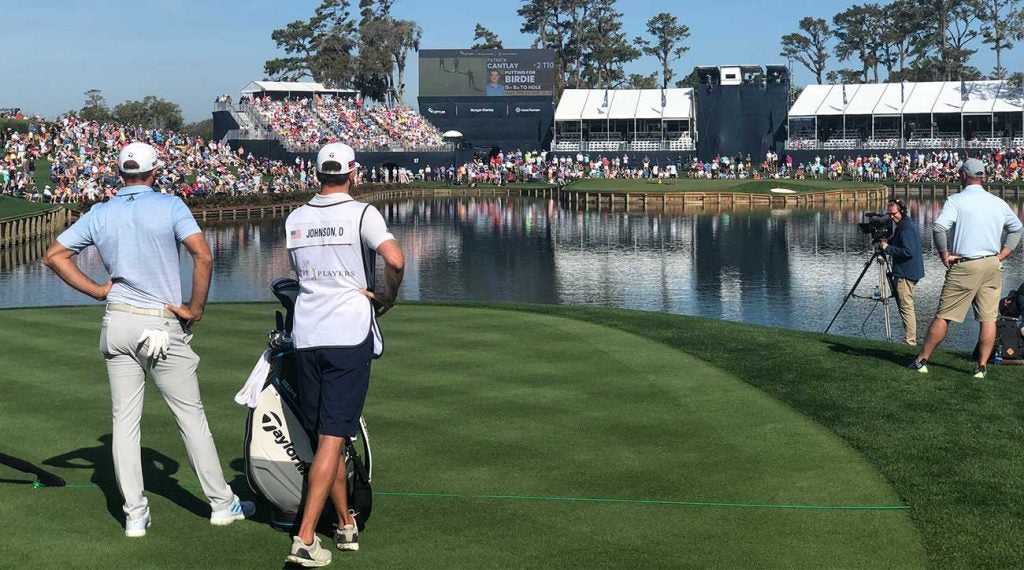 Dustin Johnson prepares to tee off at the famed 17th hole at the Players Championship shortly before the PGA Tour announced its decision to ban fans from entering for the remainder of the week.
James Colgan

Disappointment was a common thread among fans at TPC Sawgrass today, but perhaps none more than Bennett and Welch.

“If (Straka) was five over, it’d be easier to turn around and go home,” Bennett said. “But of course, he’s playing really well. It’s just frustrating.” (Straka finished the day three under in a tie for 18th.)

Welch, who also attended high school with Straka, wondered aloud whether this year’s winner would be seen as “less than” past Players champions, given how inextricable the championship is to its raucous environment.

The intrigue over how much the Tour stands to lose by closing its gates was almost unanimous.

“Just think about all the revenue that’s generated every day here, from the concessions, the tee shirts, everything,” Welch said. (When pressed on how the announcement would impact the Tour’s financial situation, commissioner Jay Monahan declined to offer a specific number but said, “it’s significant.”)

The Tour’s decision is historic. The situation is unprecedented. But those most closely affected by the ban —the fans — are already making new plans.

“What are we going to do tomorrow?” Honan said, “We’re going to go play golf somewhere else.”