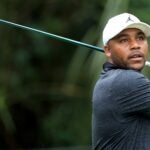 Harold Varner III hits his tee shot on Thursday on the 15th hole at TPC Sawgrass.

PONTE VEDRA BEACH, Fla. — The reason you like HV3 — how can you not like the dude? — is that he finished his long day’s journey to 69, here in the first round of the Players Championship, with a triple bogey and a bogey and still he exhibited his customary good cheer.

And then he signed for fans, talked to reporters and cooled his jets. He knew the sun would rise come morn. He knew his T36 paycheck for $48,000 was going to clear.

Whatever happens in rounds 2 and 3 and 4 (if he gets that far) here at the Players, it’s all good. It really is.

Varner is trying to play his way into the Masters, a tournament he’s never played in. Of course he wants to play in the Masters, this year or any year. But if he doesn’t, he doesn’t.

Varner has had the chance to pick the brain of one of his golfing idols, Tiger Woods, and his sporting idol, Michael Jordan. He wears MJ-branded clothes from his hat to his shoes. But he doesn’t have either man’s smoldering intensity.

“Tough game, isn’t it?” a reporter said to Varner when he came in, trying to soften the blow.

Varner, 31, won last month in Saudi Arabia, the PIF Saudi International, an Asian Tour event. He made a bomb on the last for an eagle and a one-shot win over Bubba Watson. He has not won on the PGA Tour. Because he won in Saudi Arabia, there was speculation that he would be recruited to join the golf league reportedly being planned by Greg Norman and funded by the Saudi ruling class.

“My name went right to the top of the list, and I do have to commend [PGA Tour commissioner Jay Monahan] for sitting down and talking to me and being totally open about,” Varner said. It wasn’t entirely clear what he meant, but the message he conveyed is that his fealty is to the PGA Tour.

On the par-3 17th, the most either-or par-3 on the PGA Tour, Varner said he was debating between a wedge with some oomph or taking something off a 9-iron. The pin was in the middle of the green, toward the back. The green was soft from the day’s heavy rains. Varner hit it right into a slope, and, as hard, well-hit wedges tend to do, it spun like crazy — back into the water. You take something off a 9, the shot comes in more quietly. Nobody ever accused Varner of being a golfing artist. He swings hard and takes big divots. Varner’s sand wedge from the drop zone almost spun off the green, too. He needed three more shots to hole out.

On 18, his 120-yard approach shot, after chipping out after a wayward drive, spun back 30 or so feet.

“I feel like I’m getting better,” Varner said. “It’s just so hard to win.”

The feeling you get from the man really is this: Life’s good.

On his first shot of the day, Varner was about five seconds away from declaring his ball lost.

“The coolest thing that happened today was Will Zalatoris’ caddie [Ryan Goble] found my ball on the first hole, like five seconds left before I had to go back to the tee,” he said. “He stepped on it. It could have been totally different. So I’m super fortunate.”