FARMINGDALE, N.Y. – Harold Varner III will go into the books at this 101st PGA Championship as the guy next to The Guy. He played alongside Brooks Koepka in the afternoon’s final pairing, and because Varner was seeking his first PGA Tour title of any kind, let alone a major, it was the chance of a lifetime.

He played terribly. Couldn’t hit a fairway. Couldn’t buy a putt. Hit some squirrelly shots and ventured into some strange places. He signed for 81, the highest score out of 82 competitors on this breezy and brutal day. He finished the tournament 14 shots behind Koepka.

But don’t feel bad for Varner. He certainly isn’t feeling bad for himself.

“That was crazy, but it happens. It was just hard,” Varner said afterward. “I still had a good time. It’s what you play for. That’s my first time there and can’t wait to get back there.” 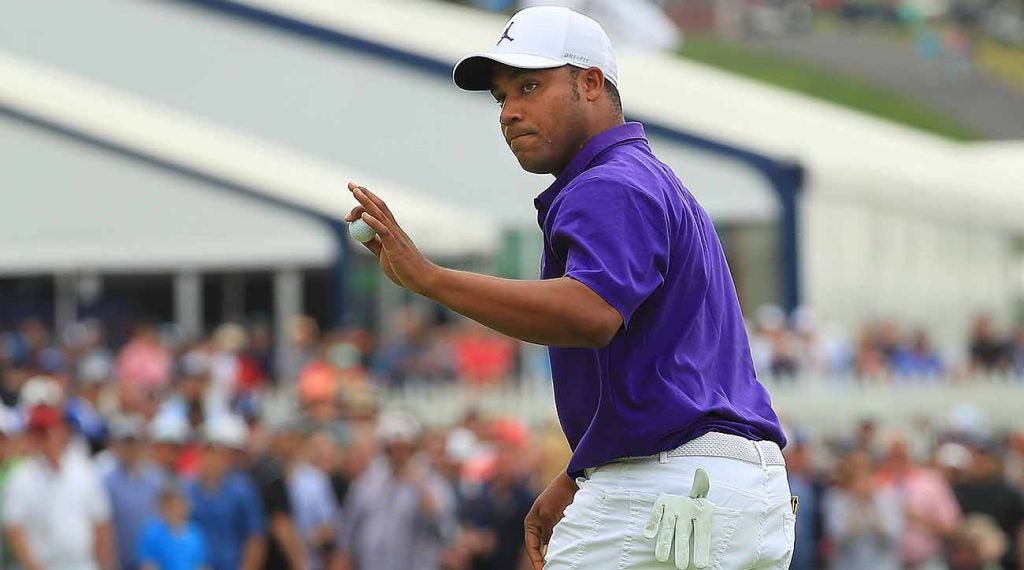 Harold Varner shot an 11-over 81 in Sunday's final round at the PGA.
Getty Images

Varner began the final round tied for second place, seven shots back, and as the afternoon progressed he plummeted out of the top five, the top 10, the top 20 and the top 30. Second place would’ve paid north of a million dollars, and for a pro who’s earned $4.3 million in three-and-a-half seasons on Tour, it could’ve been a life-changer. He should’ve been crushed, but that’s not his style.

“I was super excited, man. It’s a great opportunity. I just don’t know how you can’t get up for that,” he said. “I just didn’t play very well. I didn’t do what I was supposed to do. I’m excited to learn from it and get better.”

Varner’s always been this way. The 28-year-old was born in Akron but raised in Gastonia, N.C. His dad, Harold Jr., got him into golf and together they honed their games at munis. As a teenager HVIII cleaned carts and picked the range at the local private club, Gaston CC, because he wanted golf privileges there. He was a good high school player despite his diminutive 5-foot-8 frame and he played college golf at East Carolina University. As a senior in 2012, he was named his conference’s Player of the Year. It was quite a rise.

“At the beginning of his career he was raw. He wasn’t much bigger than a golf bag and he played a big, old hook,” said Press McPhaul, who coached him at East Carolina. “He was always having fun. After his first match as a freshman, we played 36 holes and stopped at an Outback. Everyone on the team was beat. He looked around and said, ‘I don’t know why you guys are so tired!”

McPhaul says Varner’s attitude along with his competitive drive propelled him from unheralded recruit to the final pairing at the PGA.

“He’s got a no-fear mentality. He doesn’t back down,” McPhaul said. “He’s not constrained by what goes wrong, he just goes to the next shot. It’s a gift, and I think that’s his great separator.”

Varner is a high-energy guy, and when he bounced out to the opening tee shortly after 2:30 on Sunday afternoon, he was snapping his fingers and searching for the sign-bearer.

“I didn’t see you!” Varner said while hustling back behind the box for the customary handshakes. He was keyed up. Heck, this was only his fifth career major-championship appearance. It was the second time he’d made the cut. (He placed 66th at the 2016 British.) But at the start he managed his nerves perfectly: he split the opening fairway, punched a wedge to three feet and canned the putt. As Koepka made a sloppy opening bogey right beside him, for about, oh, 20 minutes or so, you wondered if Varner might be a guy to emerge as Koepka’s prime Sunday challenger.

Didn’t happen. Varner made back-to-back doubles at 3 and 4 and staggered in from there. But it’s all part of the progression for a guy who’s always had to earn it. Varner received his PGA Tour card in 2015 after finishing 25th on the Web.com’s money list – the final spot for an automatic Tour card – by a mere $943. A year later, he won his first and still-only professional title at the Australian PGA Championship.

He’s also a trail-blazer – he’s the first African-American to qualify for the Tour through the Web.com, and he’s one of only three African-American players on Tour today, along with Tiger Woods and Cameron Champ. Varner is buds with Tiger and carries a sponsorship deal with Michael Jordan. Varner sports the “Jumpman” logo on his hat and shirt and never plays a round without MJ’s signature shoes. Varner said both Woods and Jordan texted him supportive messages this week.

“I try to bounce things off of them since they’re the best in the world at their sports,” Varner said. “They keep it really simple. They do a really good job of doing the little things right. I’ve always known that, but it hear it from their mouths is a different story.”

It’s fast company for a player who likes to move fast and talk faster. (Even his funky swing has a little extra turn in his follow-through.) On Sunday he spent a good chunk of his round chatting up a security guard who, it turned out, enjoys music from the rapper Drake, just like Varner. “I talked to him for about four holes,” Varner said with a laugh. “That was pretty cool.”

Varner will take next week off to hang with his parents in North Carolina. He said his dad just picked up some new clubs and is dying to try them. And Harold III also plans to cut his parent’s lawn. He’s just going to stick to his routine in hopes of one day getting another shot like he had on Sunday.

“I know what it takes to get there. I don’t have to do anything outside the realm of what I believe I can do. That’s comforting to know,” he said.

“I’m not defined by my score, so I’m going to be all right.”

It’s impossible not to believe him.