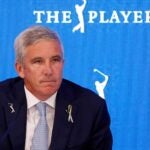 PONTE VEDRA BEACH, Fla. — The words sounded the way they usually do coming out of Jay Monahan’s mouth: as if they’d been plucked from a Public Relations textbook.

They were delivered by the PGA Tour commissioner in careful, measured clauses and punctuated by long, attention-grabbing pauses. As is Monahan’s tradition, his responses contained the minimum amount of information needed to answer the questions, if they answered them at all.

But even if Monahan’s words sounded like they belonged at a shareholders’ meeting, they landed upon the golf world like a powerful right hook.

Monahan’s Players Championship state of the union press conference Tuesday morning was unlike anything we’ve heard from the commissioner in his half-decade atop golf’s largest professional tour. In the span of 45 minutes, the typically cautious commish delivered blow after blow to the Tour’s competitors, detractors and ill-wishers.

The press conference began at TPC Sawgrass promptly at 11 a.m. ET. By 11:01, Monahan had landed his first shot.

“Before I make some additional comments on the Players Championship, I wanted to take a moment to address all of the news, discourse and conjecture lately about the world of professional golf,” Monahan said. “The PGA Tour is moving on. We have too much momentum and too much to accomplish to be consistently distracted by rumors of other golf leagues and their attempts to disrupt our players, our partners and most importantly our fans from enjoying the Tour.”

He looked up from the lectern and paused.

“We are and we always will be focused on legacy, not leverage,” he said, alluding to Phil Mickelson’s choice of words in his now-infamous interview with golf writer Alan Shipnuck.

Mickelson has stepped away from golf indefinitely in the fallout from the interview, and his future with the PGA Tour remains uncertain.

Monahan refused to say whether the Tour had suspended Mickelson for his comments, citing Tour policy not to share disciplinary matters publicly, but he did briefly address the affair.

“The ball is in his court,” Monahan said. “He has said that he’s stepping away and he wants time for reflection. That’s something that I and we are going to respect and honor. When he’s ready to come back to the PGA Tour, we’re going to have that conversation. That’s a conversation I look forward to.”

A conversation Monahan won’t entertain, though, is the possibility of a rival tour emerging. Monahan refuted Greg Norman’s claims that Monahan had “bullied” players into staying with the PGA Tour (“that’s not how I operate”) and refused to mention Norman or his proposed league by name.

On the topic of whether Norman’s LIV Golf Investments proposed a long-term threat to the Tour, Monahan spoke with supreme confidence.

“There isn’t [a long-term threat facing the Tour],” he said. “We control our own destiny … So long as we focus on the things that we control, which is what I’ve always tried to do and what we’ve always tried to do as a team, I think we’re going to win, we’re going to grow, and I’m not looking over my shoulder, I’m looking forward. I’m excited about what’s ahead of me and what’s ahead of this organization.”

For all his optimism, Monahan is smart enough to realize the role the Tour played in creating the Phil mess. If there is a long-term threat to the Tour’s dominance, it would seem to exist among the constituency.

The players have been emboldened by the rival tour developments, and have seized the opportunity to air their grievances against the Tour establishment. Shortly before Monahan spoke on Tuesday, Tour poster-child Rory McIlroy issued a rare public slight of the commissioner’s office.

“I think the one thing that the Tour in general could do a better job at is transparency, whether that be with — yeah, just with everything,” McIlroy, who heads up the Tour’s Player Advisory Council, said. “I think transparency and maybe it not being as closed a shop. I’ve always felt that a few of the bans or suspensions, I think that should all be announced. I think that should be more transparent. I’ve always said that.”

“I don’t think you can ever be good enough on that front, and I take that on myself, and I think you’ll see us continue to be more transparent and answer any questions that we think are on the minds of our players,” he said. “We have nothing to hide, and we’re proud of what this organization represents, the values it conveys, the way that we run our business.”

Monahan’s remarks Tuesday — and the manner in which he delivered them — revealed a different side of the man: the tight-buttoned, tight-lipped suit had been replaced by the street-fighting hockey player from outside Boston. Perhaps most impressive, he’d done so without ever once raising his voice.

The commissioner’s press conference represented not only the PGA Tour’s first and most forceful rebuke of the developments of the last six months in golf but also a warning shot to anyone standing in Monahan’s way: If you’re coming for golf’s throne, you’d better be ready to fight for it.

The Southie accent is long gone, but the right hook still has some juice.

“I wake up every day assuming someone is trying to take my lunch,” Monahan said, expressing no emotion. “That’s the way I operate. That’s the way we operate as a team.”