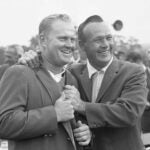 Jack Nicklaus and Arnold Palmer at the 1965 Masters.

Jack Nicklaus has long been the go-to guy for players looking to get a leg-up on strategy at Augusta National, and for good reason. Not only is Nicklaus the game’s greatest major champion with a record of 18, he’s also won six green jackets — the most ever. Beneficiaries of his extensive experience include Trevor Immelman, Charl Schwartzel, Jordan Spieth, Justin Thomas and Rory McIlroy, to name a few.

And while Nicklaus gained his intricate knowledge of Augusta’s nuances largely on his own, there was one player he credits with teaching him a hard lesson about Augusta National: his longtime rival and good friend, Arnold Palmer. As Nicklaus explains to Sean Zak and Michael Bamberger in the latest episode of the Drop Zone, Palmer’s influence on the way Nicklaus approached Augusta National dates all the way back to Nicklaus’ first Masters. “When I played in 1959, my first year, I hit 31 greens in regulation in 36 holes,” Nicklaus said. “I had eight three-putt greens. I shot 150. Arnold [Palmer] shot 141. He was leading the tournament. He hit 19 greens in regulation. I’m sitting there thinking, what does that tell me? It’s telling I’d better learn how to putt these greens. Because I can play the golf course. So that’s what I set out to do.”

Nicklaus missed the cut in 1959, but was T13, T7 and T15 in his next three appearances before winning his first green jacket in 1963. From there, the Golden Bear had an incredible run of 18 top-10 finishes between 1964 and 1987, including five additional victories.

“[Bryson] DeChambeau has figured things out in a way that benefits him and gives him an advantage. Well, I did the same thing in a different way,” Nicklaus continued. “I figured out what not to do, what to do, how to go about it, how to prepare for it, and then execute it.”

You can listen to Nicklaus’ full Drop Zone interview below, including his hole-by-hole breakdown of Augusta National, the six shots he believes determines every Masters champion, and more.