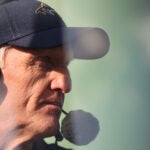 Greg Norman spoke to reporters at the QBE Shootout on Thursday.

The golf world was rightfully intrigued.

Norman, after all, is at the helm of a new company called LIV Golf Investments that is backed by a Saudi fund. LIV has already committed hundreds of millions of dollars to the Asian Tour and has also expressed interest in a breakaway golf league to rival the PGA Tour. So the fact that Norman is the CEO of LIV but also the host at this week’s QBE Shootout, a South Florida event co-sponsored by the Tour, made Thursday’s scheduled press appearance somewhat awkward.

Because the QBE is not, on its own, a particularly high-wattage event, the majority of interested media members were planning to call in from off-site. Norman was scheduled to appear after his 10:24 a.m. ET pro-am time, which had him slated for roughly 3 p.m. But that time came and went without any Norman appearance in the Microsoft Teams virtual press center.

As it turns out, that’s because there was an internet outage on site, limiting the access of all in-person media and the Tour’s ability to bring in questions remotely. Attempts to use the internet from the nearby hotel also failed when that system was overwhelmed, according to those on site. As a result, Norman conducted a brief interview with on-site media and then went on his way.

The interview was recorded and later transcribed. So what did he say? Much of it pertained to the event itself, informally still known as the “Shark Shootout,” now in its 21st iteration. Norman called it “one of my busiest but favorite weeks of the year.” He spoke of Southwest Florida as an “untapped region” when it comes to professional golf. He said he was proud that LPGA stars like Lexi Thompson and Annika Sorenstam have played year after year against their PGA Tour counterparts.

As for LIV and the long-rumored breakaway tour? He didn’t answer any of your biggest questions, like which players might be involved. He was never going to in this setting, regardless of who was asking the questions. But let’s go through what he did say.

First, Norman spoke about the company’s new COO, Atul Khosla whose hiring was announced earlier Thursday. Khosla worked most recently as chief corporate development and brand officer for the NFL’s Tampa Bay Buccaneers and drew praise from Norman, who added that there were no additional updates.

“At the end of the day you can only bring those people in who actually have full faith in what you’re doing,” Norman said. “And I love it, I think it’s great for the game of golf. They see the advantage of it, they’re looking forward to the journey ahead and I think from a mutual respect in the situation, the game of golf is going to be the benefactor and the players are going to have the opportunity of independent contractors to go play both tours and I think that’s fantastic.”

If we’re grasping for some sort of takeaway, perhaps there’s a measure of progress in the fact that Norman publicly acknowledged the existence of “both tours.” Still, not much there.

After Norman fielded a question about the team of Matt Kuchar and Harris English, he took another one about his new golf venture — this time a query about his level of confidence. Norman cited LIV’s Asian Tour investment as evidence they’re going full steam ahead.

“I can’t remember the last time anybody wanted to come out and invest a couple hundred million dollars into an Asian tour, a tour in general from the outside. I think that’s a testament to our commitment of where we want and how we want the game of golf to grow,” he said. He added that he has spent time in Asia for 40-plus years and has been inspired to continue investing in that market.

“I still go to Asia through my golf course design and through my consumer products and I see what has been needed there. I see the development of the game of golf, and all through the Pacific Rim there, specifically Vietnam. I see it in Thailand, I see it in Singapore, I see it in Japan. We’ve got Hideki Matsuyama, who used to be the Asian Amateur [champion], now the U.S. Masters champion. I just want to be able to allow these players more of an opportunity to get the growth and the development they do need to be where they want to be, be a Hideki Matsuyama coming through the Asian ranks and coming up and winning a major championship let alone the U.S. Masters.

“You know, I’m very, very passionate about that. I’m not going to lose focus on that at all. I stay finely tuned with my C-suite people on the same thing about our future and about how we want to get to certain milestones in our life and obviously for our investor. They’ve invested for a reason, they invest for a reason because they see golf and sport as an asset class now and you’ll see it all around the world, whether it’s in IPL cricket or whether it’s even the NFL, NBA, NHL, you see it in all different leagues, people invested in sport in general.”

There’s a little bit to make sense of there. Taken at his word, Norman is excited because the money sent to the Asian Tour will be a boon for prospective pros in underexposed regions of the world. What’s left unsaid is what “certain milestones” are, how close LIV is to reaching those milestones and what the next move will be from “our investor” if those milestones are or are not reached.

Then Norman answered a question about what would make a proper pairing for that week’s format. He referenced his complementary play with longtime partner Steve Elkington.

“I’d let Steve put it down the fairway and I’d get up there and just hammer my driver as hard as I could, right? As long as he was in play, I would open my shoulders up.”

And that was that. Norman was off. We’ll hear from him in a guest appearance on this weekend’s QBE broadcast, though that’s a particularly unlikely place to take breakaway league questions. LIV will likely release further news if and when they consider it to be in their favor. They’ll play the QBE Shootout in the meantime, with its future — as the rest of Norman’s golf endeavors — shrouded in mystery.