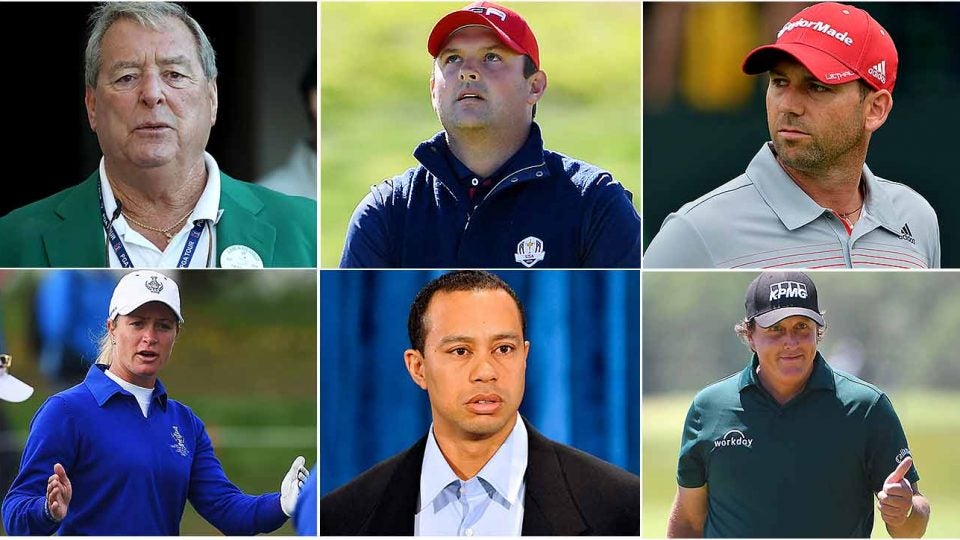 Like Bill Clinton, Justin Bieber, Kanye West, Matt Lauer and most every public figure whose name ever appeared on Page Six of the New York Post, Sergio Garcia would like to let you know that he is sorry. He said so this week on social media, and again in person on Golf Channel Wednesday evening, where he expressed contrition for his cranky-toddler antics that left five greens damaged at a European tour event in Saudi Arabia. Because Garcia is far from the first golf-world notable to issue a headline-making mea culpa, we ask for your forgiveness — and forbearance — as we unveil a list of the game’s 13 most memorable apologies.

Turns out Sergio Garcia doesn’t only issue apologies. Sometimes, he’s on the receiving end of them.

“I sent him a message through (Jose Maria Olazabal) telling him it wasn’t reported how it happened,” Nick Faldo said in 2014. It was Sir Nick’s way of softening the hard feelings he caused by calling Sergio Garcia “useless” at the 2008 Ryder Cup, where Faldo had served as European captain. “I should have sat him down and told him we needed him…” Faldo said. “That’s where I was the useless captain.” 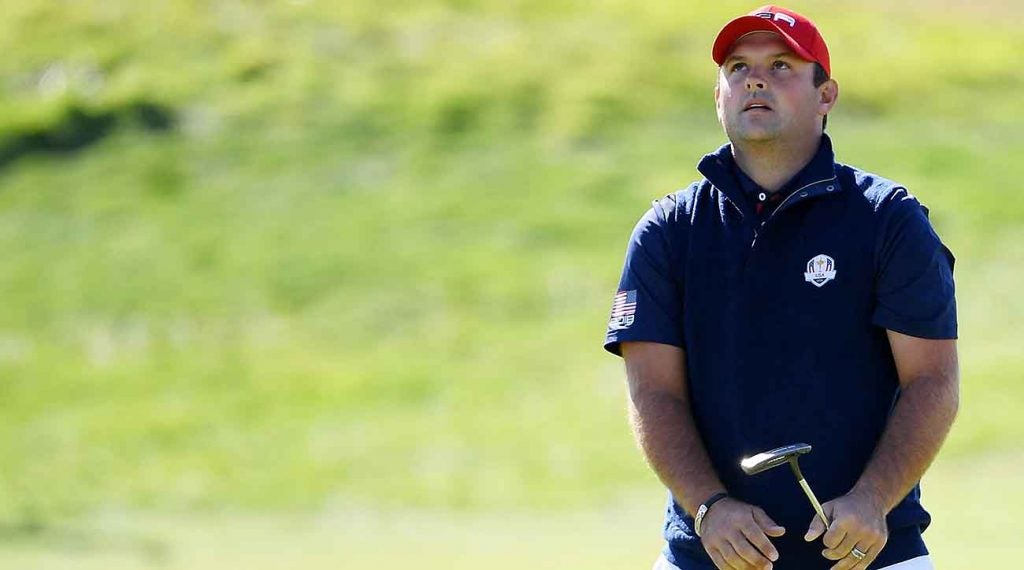 12. Extra! Extra! Reed all about it. Captain America apologized. Kind of.

“Obviously the things with Patrick, it just kind of took on a life of its own,” Brooks Koepka said, earlier this month, alluding to the swirl surrounding Patrick Reed for his polarizing post-Ryder Cup comments about Jim Furyk and Jordan Spieth. “We’ve got a group text, and there were some texts that were sent,” Koepka added. “He kind of apologized.” 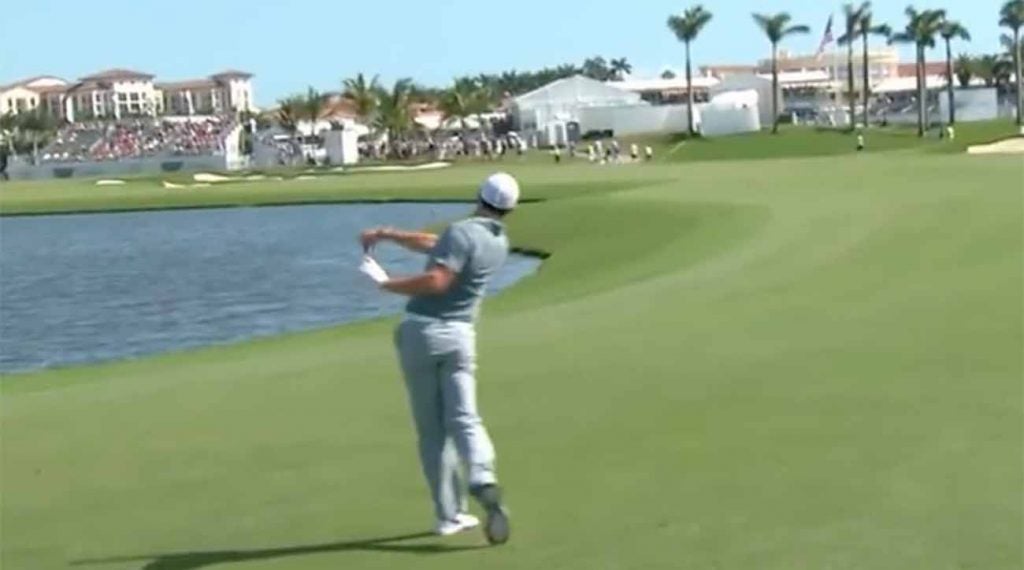 “What happened after the second shot on 8, I wouldn’t encourage anyone to do,” Rory McIlroy asserted after a round at the 2015 WGC-Cadillac Championship in which he tossed his 3-iron in frustration into a lake. “Especially if there’s kids watching at home. First of all, it’s expensive and second of all, you shouldn’t do it.”

Expensive, yes. But not as costly as it could have been, as McIlroy acknowledged a few months later. “The fine was reduced from $25,000 to $5,000 because I said I was sorry on the TV interview afterwards,” he said. 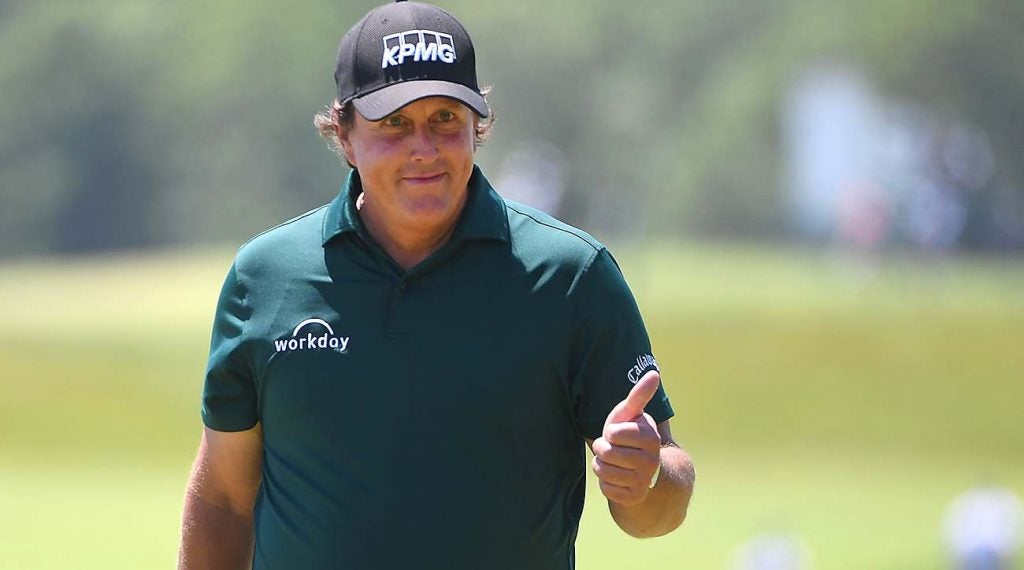 “I know this should’ve come sooner, but it’s taken me a few days to calm down,” said Phil Mickelson, reflecting on a personal low point at the 2018 U.S. Open when he whacked a moving ball on the 13th green at Shinnecock Hills. “My anger and frustration got the best of me last weekend,” Mickelson continued. “I’m embarrassed and disappointed by my actions. It was clearly not my finest moment and I’m sorry.”

9. Some people have a way with words. Other people not have way

“I was unaware that my use of language in relation to the Pakistani people would cause offense, but having been made aware I now deeply regret the use of that terminology.”

That “terminology” appeared in a 2013 tweet from Steve Elkington, describing an evening in Southport, England, during which he said a couple of caddies “got rolled by some Pakkis, bad night for them.” 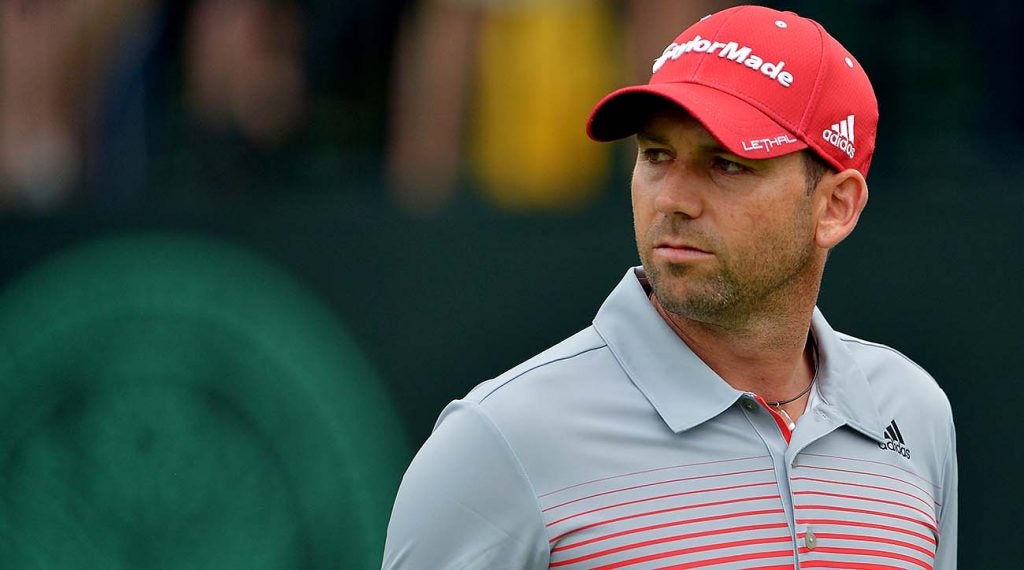 8. A second helping of the same dish

“We’ll have him around every night. We will serve fried chicken,” Sergio Garcia said, when asked about the prospect of hosting Tiger Woods for dinner during the 2013 U.S. Open. It wasn’t long before he ate those words. “I was caught off guard in what seemed to be a funny question and tried to give a funny answer that came out wrong,” Garcia said. “I want to make sure everybody knows that I’m very, very sorry and I can’t apologize enough times.” 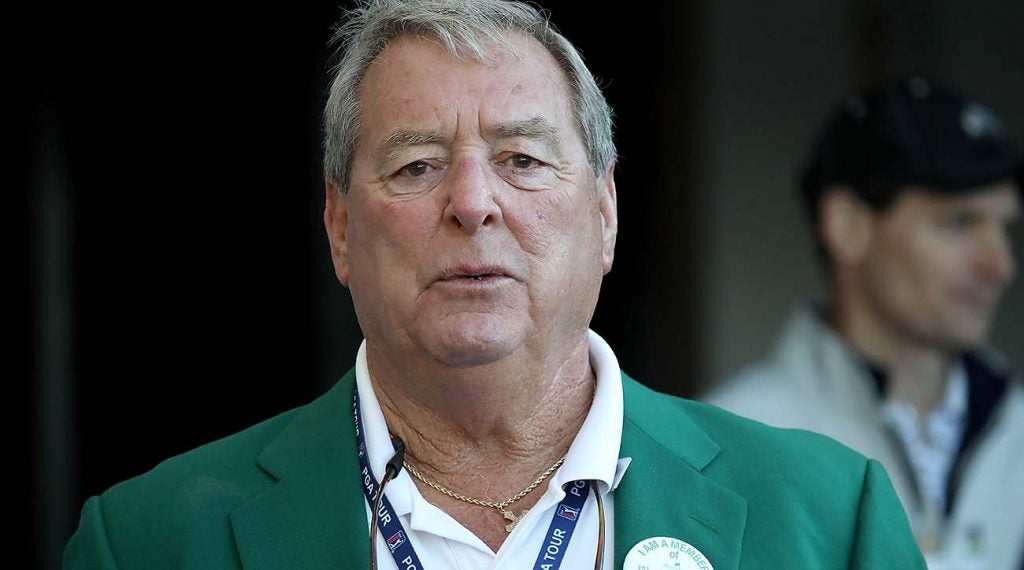 7. Fuzzy wuzzn’t all that funny, wuz he

“I’ve been on the tour for 23 years and anybody who knows me knows that I am a jokester. It’s too bad that something I said in jest was turned into something it’s not, but I didn’t mean anything by it and I’m sorry if I offended anybody.”

The quip in question caused quite a stir at the ’97 Masters, where Fuzzy Zoeller referred to Tiger Woods as “that little boy” and recommended that he not serve fried chicken and collard greens at the champions dinner the next year.

6. That ‘Lil girl’ thing was more than a lil problem

“I created this mess—it’s my fault. I don’t think the punishment fits the crime, but it is what it is.”

The crime was a 2014 tweet dispatched by then PGA of America President Ted Bishop, calling Ian Poulter a ‘lil girl.’ The punishment was Bishop’s dismissal from his post.

“Finances and taxes are a personal matter, and I should not have made my opinions on them public. I apologize to those I have upset or insulted, and I assure you I intend not to let it happen again.”

This came from Phil Mickelson, in 2013, in the wake of his let-them-eat-cake grousing about how much he had to pay in taxes. 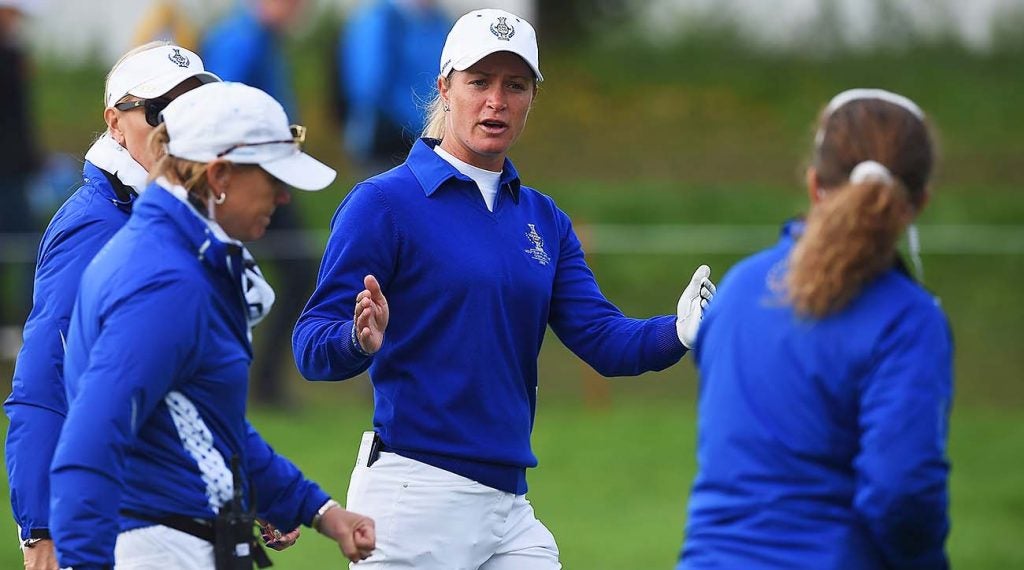 4. She didn’t concede the putt; she conceded she was wrong

“I’ve never felt more gutted and truly sad about what went down Sunday on the 17th at the Solheim Cup,” said Europe’s Suzann Pettersen, regretting her failure to give an 18-incher to her American four-ball opponent Alison Lee at the 2015 event. Thinking her putt was good, Lee scooped up her ball. Loss of hole for the Americans. A point for the Europeans in the match.

“I have known Tiger for 12 years and I have apologized directly to him. I also apologize to our viewers who may have been offended by my comments.”

May have been? No doubt many were angered by Golf Channel anchor Kelly Tilghman’s off-the-cuff suggestion that young Tour pros bent on besting Woods should “lynch him in a back alley.”

2. In retrospect, maybe we should have just clapped

“The celebration spilled over. We do apologize sincerely. We’re truly sorry.”

That was U.S. Ryder Cup captain, Ben Crenshaw, in 1999, lamenting the excessively jubilant moment when players, wives, caddies and other celebrants stampeded the 17th green at The Country Club in Brookline before the decisive match was really over; Jose Maria Olazabal still had a putt to halve. 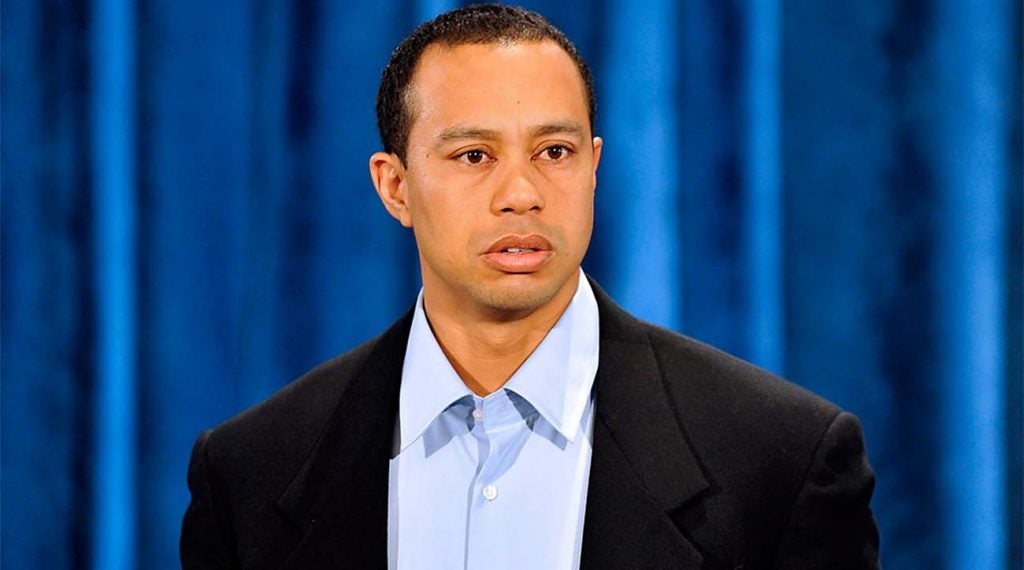 Woods apologized publicly for his transgressions, but who were we to judge him?
Getty Images

“I was wrong. I was foolish. I don’t get to play by different rules. The same boundaries that apply to everyone apply to me.”

So said Tiger Woods, in his 2010 televised apology in front of those dreadful blue drapes for a string of infidelities that made for tabloid fodder around the globe. It is, and shall ever remain, the mother of mea culpas.