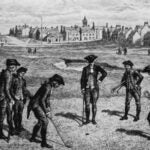 A group of men playing golf at the Royal and Ancient Golf Club of St Andrews, Fife, Scotland, 1798.

Welcome to the first installment of Golf Questions You’re Afraid to Ask (But I’m Not), a GOLF.com series dedicated to helping beginners (and also experienced players in need of a refresher!) learn the basic rules, strategy and history of the game. My name is Jackson Wald, and I’ve been GOLF.com’s intern for four months now. I grew up a fan of the game, but I never learned the basic mechanics or fundamentals. So I guess I’d consider myself a newcomer, and I’m not alone: In fact, according to the National Golf Foundation, in just the last five years more than 12 million new golfers visited a golf course for the first time. Twelve million! That’s why, with (a lot of) help from GOLF Top 100 Teacher Kellie Stenzel, and various other experts of the game, it seemed an ideal time to launch this series. I’m hopeful you — the reader — and I can venture on this learning journey together.

For the first edition of GQYAA, I figured I’d start at the beginning. As in, who came up with this crazy game, and how did it become so popular?

To better understand golf’s roots, I spoke with Maggie Lagle, a historian at the United States Golf Association. Lagle provides tours throughout the USGA’s museum — from school groups to former past champions — and conducts research into the history of golf. Some of her most substantial work has included studying how golf has influenced past U.S. Presidents, how military veterans use the game as a rehabilitation tool and golf’s relevancy during wartime.

During our conversation, Lagle and I discussed the origins of golf, its notable figures and how the game has evolved over time.

According to Lagle, there is still quite a bit of debate among historians as to the origins of golf, but there is no doubt that the Scots cultivated the foundations of the modern game.

“Early ball and stick games can be traced back to the 13th century,” Lagle told me. “Not only were these games being played in Europe, but they were also being played in Asia and parts of Africa as well. There were even ball and stick games that can be traced back to China in the 11th century, which is pretty incredible.” But Scotland kept the precursor to the modern game alive, and they were really the ones that ushered it into this present form, which emerged in the 15th century.”

Why is it called golf?

Etymologically speaking, “golf” was derived from either the Dutch work kolf or kolve, which simply translates to “club.” But then, as Lagle notes, in the Scottish dialect of the late-14th and early-15th century, the Dutch term became goff or gouff. It was only later in the 16th century when the word “golf,” spelled the way we all know it now, appeared.

“The connections between the Dutch and Scottish terms are evidence of the active trade industry between Dutch ports and the ports on the east coast of Scotland, from the 14th-17th centuries,” Lagle said.

How did golf develop over time?

It wasn’t until the 16th century that information on how to play golf appeared in writing. This writing — which appeared in various books in Latin and Dutch — detailed the rules at the time (for example, in putting, the ball had to be struck; merely pushing the ball was forbidden). Golf during this period was mostly played in informal and very friendly games at match play in Scotland, and the links were public land.

These courses were often where livestock such as sheep and goats were kept as well, as these animals served as that generation’s agronomists and lawn mowers.

“[The townspeople] would just go play golf and bring their goat with them and let them go mow the grass,” Lagle said.

For a brief period in the 18th century, the game was banned by the Scottish monarchy. According to Lagle, the Scottish king felt the game distracted Scotland’s citizens from military practices and archery practices — as soldiers would routinely skip their training to get in a round on the links.

So, when did golf become really big?

It wasn’t until the 19th century that golf began to expand in popularity. Its growth, in large part, was due to the Industrial Revolution; the creation and development of the Scottish railway system allowed for English tourists to take the train to Scotland for golf trips and holidays.

Historians believe that early versions of golf — such as the aforementioned ball and stick games and early Dutch precursors to golf— arose in America between 1650 and 1660 in upstate New York. These early versions of the game began to rise in prevalence and popularity closer to the 1770’s in British and Scottish communities in New York City, the Carolinas, in towns such as Pinehurst, and Charleston, and Savannah, Georgia, all of which had golf clubs and active golfing communities. Documents from ship manifests at the time include quantities of golf clubs and balls being shipped from Europe to the United States.

This popularity of the game died down around the War of 1812, but made its final, major resurgence in America in the 1880’s. By December of 1894, the United States Golf Association was established, and by 1895, the U.S. Open, the U.S. Amateur, and the U.S. Women’s Amateur golf tournaments were first contested.

Who are the key figures to know about?

John and Elizabeth Reed are credited with popularizing golf in the United States. John Reed founded the St. Andrew’s Club (one of the founding clubs in the USGA) in Yonkers, New York in 1888. Elizabeth Reed founded Saegkill G.C. for women nearby. According to Lagle, John Reed is a pivotal figure who brought the game from Scotland and truly established it in America.

Lagle also pointed to Bobby Jones, who, even as he remained an amateur for his entire career, won the Grand Slam in 1930, and co-founded Augusta National during his retirement.

Glenna Collet Vare — also known as the Queen of American Golf — dominated the American golf landscape in the 1920s, winning the Women’s Amateur Championship six times (the record for that tournament).

More recently, golfers like Arnold Palmer, Jack Nicklaus, and Tiger Woods have become not only household names in the golfing community, but internationally recognized sporting superstars and their celebrity has extended far past the sport.