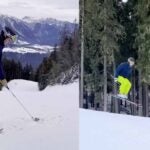 Ugh. Winter. Those wretched few months of cold when our hats transform to wool and our clubs disappear to the garage.

The offseason is loaded with improvement potential, but that’s largely because so many of us spend so little time playing golf during it. Instead, golf is reserved for the warmer, longer days of spring and summer. Sure, it’s a sound principle, but isn’t it a more sound principle to live somewhere that allows you to play golf year-round? That’s what the pros do, right?

Well, don’t book that trip to Jupiter quite yet. One pro is revolutionizing the way we look at golf in the offseason, and he’s doing it from the side of a mountain. Or is he technically on the mountain? Either way, let us explain.

Austrian professional golfer Matthias Schwab is taking new license to the idea of offseason golf. Schwab, who plays primarily on the European Tour, has not gone south for the winter. In fact, he’s remained firmly in place in what appears to be in the middle of the Swiss Alps.

The Alps, as you may have heard, are one of the world’s premiere vacation destinations. But no, not for their award-winning golf. Rather, the Alps are famous for the winter months. Particularly, the Alps are known for the bands of white snow that blanket the mountains, making perfect conditions for skiing and snowboarding.

So, what is Austrian professional golfer Matthias Schwab doing on the side of a mountain to play golf in the offseason? Has he built a high-tech simulator? Or maybe a biodome?

No, Matthias Schwab is playing golf on the side of a mountain. In the snow. On skis.

The 26-year-old has taken up cross-country skiing and with it, a unique opportunity to play the game he loves. Schwab posted a (now viral) video to Twitter of his new hobby over the weekend, showing how he’s taken to the slopes with a 9-iron in place of a pole. You can watch for yourself below.

While we’ve got some serious questions about the long-term efficacy of cross-country golf (particularly the impact cross-country skiing boots have on lower body torque), we can’t help but admire the effort from Schwab to keep his game sharp in seemingly the worst conditions imaginable. Schwab’s idea is an admirable way to get some swings in the snow, and perhaps one that hasn’t gotten its proper due from the golf community.

Imagine a world where cross-country golf becomes a winter alternative for many of golf’s great cold-weather courses — a whiteout 36 at Shinnecock and NGLA or a blizzard stop-off at Whistling. The opportunities are endless, if legally dubious.

For now, we think we’ll tip our cap to Schwab and double-down on our weekly time at the indoor simulator. But hey, there are worse ideas.