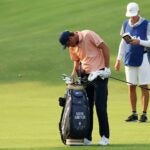 Scottie Scheffler shot a one-over 71 on Thursday at Southern Hills.

Masters champ Scottie Scheffler showed a rare moment of public frustration on the final hole of his first round at the PGA Championship on Thursday — yet it turned into his best par save of the day.

Scheffler, the 25-year-old World No. 1, was one under on the front nine of Southern Hills on Thursday, but his back nine was much more eventful. He had two birdies, two pars and two bogeys on Nos. 10-15, but went bogey-bogey on 16 and 17.

Then, on the difficult par-4 18th, his frustration boiled over when he noticed his tee shot found the water. Cameras caught him letting off some steam on his golf bag.

Now, a brief moment of anger while playing a maddening game for millions of dollars isn’t groundbreaking, and this outburst won’t make someone like Tyrrell Hatton blush, but it was something we’re not used to seeing from this even-keeled Texan.

The good news? Scheffler took a drop, and from 185 yards stuck it to 16 feet and made the putt for par. He signed for a one-over 71, which left him six shots behind leader Rory McIlroy and still in good position entering Round 2.

“Definitely going to make my dinner taste a little better,” Scheffler said of the par save on 18. “Bogeying the last three is definitely not very fun, so it was good to make that par at the end. I’m still pretty frustrated with how I played the back nine, but overall, one over par playing as poorly as I did today I didn’t shoot myself out of the tournament, so I’m still in OK position.”

You can follow the second round of the PGA Championship here.