WGC-Dell Match Play leaderboard: Here’s who will play for the title on Sunday at ACC 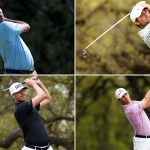 After a tough Saturday of matches, just four players remain in the hunt for the title at Austin Country Club.

In a month where the sports world comes to expect madness, the WGC-Dell Technologies Match Play has provided plenty of it.

After just one top-16 seed advanced out of the group stage at Austin Country Club heading into Saturday, the final four matches will feature the 30th, 31st, 32nd and 52nd ranked players in the world — hardly the semifinal seeds many envisioned earlier in the week. But while the number next to their name may not line up with what is considered a favorite, each of the final four is plenty capable of taking home the trophy by day’s end on Sunday.

Here’s a look at each of the final four players remaining in the Dell Match Play.

After coming into the week as a crowd favorite as a University of Texas alum, Scottie Scheffler has quickly become the favorite to win the event (at least according to seeding) as well. Scheffler came out of Group 6 after winning a sudden-death playoff with Xander Schauffele, and he carried that momentum into his two matches on Saturday.

Scheffler had little difficulty dispatching Ian Poulter in his first match of the day as he closed out the Englishman on the 14th green with a 5 and 4 victory which featured seven birdies, including four in a row to begin the back nine. The 24-year-old then faced off with the No. 3-ranked player in the world, Jon Rahm. The match was much more even than the romping Scheffler gave Poulter, but in the end the local favorite punched his ticket to the semifinals with a 3 and 1 win.

“Today was a tough day playing both those guys, but I feel like my game is in a good spot,” Scheffler said. “I feel like I’m trending in a right direction as the week has gone on, so I’m excited to get back out on the course tomorrow.”

Scheffler will be matched up against Matt Kuchar in the semifinals.

Victor Perez doesn’t have tons of experience playing on American soil, but you’d never know it based on his play in Austin. The Frenchman won Group 16 early in the week and then easily dispatched of his two Saturday opponents as he defeated Robert MacIntyre 5 and 4 in the morning before taking out Sergio Garcia 4 and 3 later in the day. He will face off with Billy Horschel in the semifinals.

Billy Horschel’s place in the semifinal was perhaps the most difficult to obtain of the remaining quartet, but thanks to a clutch birdie on the 17th hole of his match with Tommy Fleetwood, he will return to ACC on Sunday with a chance at victory.

Horschel won Group 5 with a sudden-death victory over Max Homa, and then defeated Kevin Streelman 3 and 1 Saturday morning. Fleetwood controlled much of the afternoon match, but Horschel’s 17th-hole birdie finally tied the affair and allowed him to earn the win in 19 holes to cement his date with Perez.

“[My] swing got a little loose on the back end there, but I was able to battle it out,” Horschel said. “I’m not going to stress about it anymore, and I’m not going to worry about it. I’m just going to go play some golf and see where my game is and hopefully it’s good enough.”

Matt Kuchar is the defending runner-up of the Dell Match Play, and he’s played like a player who knows his way around ACC throughout the week. He was one of just two players to win all three of his group stage matches, and he managed to gut out a 1-up win over Jordan Spieth in his first match of the day.

The afternoon proved to be another dog fight as Brian Harman refused to go away quietly, but halved birdies on 16 and 17 gave Kuchar a second-straight berth in the semifinals.