These pricey golf carts are all about puttering around in style 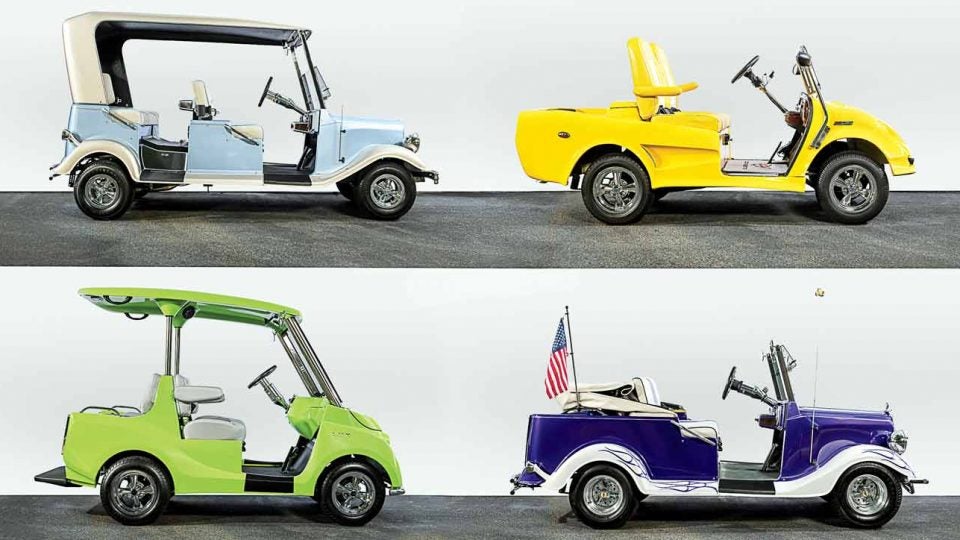 Bob Ziarko’s yellow ’Vette (upper right) and Terri Salmon’s purple pickup (below it) are just a few of the wild rides at the Villages in Florida.
Chris Garrison

Golf and fancy cars just seem to go together in retirement. They both fulfill long-held dreams. But some people have combined the two, creating customized golf carts that cost more than a zippy Mazda Miata.

Bob Ziarko, who worked at General Motors for 37 years, says he got the idea for a Corvette cart after seeing the Shriners drive a red one around at Disney World. It took him several years to find the one he wanted: a convertible in the sports car’s signature yellow, with chrome wheels and tailpipes. He paid $11,000 for it in 2018. When he got it to his home at the Villages, the sprawling golf community in central Florida, a fellow resident offered him $25,000 cash for it. No way he was selling. His wife, Mickie, had been asking for a yellow Corvette. The cart was cheaper than the real thing and more practical for the Villages.

“We cruise the town square at night,” he says. “We’ve downloaded muscle car sounds, so it sounds like an old Dodge Dart going through town.” Unless you’ve retired with great wealth and can drive a Bentley Continental GT out to Calusa Pines, in Naples, or a Mercedes SL Coupe up to the clubhouse at Seminole, in Juno Beach, these customized carts may be the best way for golfers to express themselves through what they drive. While the cost can be high for a golf cart, it’s far less expensive than what you’d pay for most sports cars.

News
Money Game Mailbag: How much does it *really* cost to be a Tour pro?

“When you talk about the Villages culture, it’s all about the golf cart, not about the car,” says Thomas Fross, who runs a financial advisory firm there with his brother Rob. “Their golf cart is their status.”

The brothers, who used to rock a California roadster cart, say they have several clients who sport maize-and-blue carts for the University of Michigan and red-and-white rides for Ohio Staters. One client has a cart that looks like an old Army jeep with fake guns hanging off the back, while a retired firefighter turned his cart into a miniature fire truck.

Given that expense, don’t expect these carts to be seen barreling past a rented E-Z-Go to get to the first tee. While these ornate four-wheelers are equipped to hold bags, many of their owners use them primarily to cruise their communities.

A basic golf cart can go for as low as $5,000. A customized six-passenger Yamaha cart with upgraded wheels and seats and a radio sells for $15,000 in Peach Tree City, Ga., another cart-focused development, says Russell Warren, marketing director at Golf Rider. Mike Salmon, 77, bought a Yamaha golf cart for $8,000 three years ago. But his wife, Terri, wanted to trade in her car and get a customized cart, too. 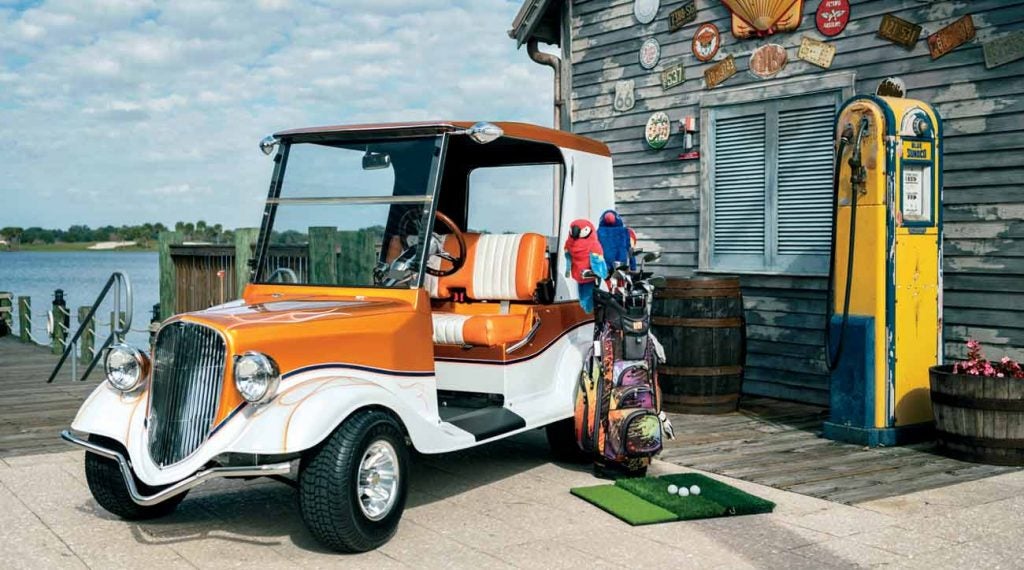 A retro Shell station isn’t the only kitsch curiosity at the Villages in Florida.
Chris Garrison

They bought a purple cart that looks like a 1934 Ford pickup truck, with a top that folds down and purple flames painted on its white fenders. It cost $20,000 — less than half the price of a new Z3.

“We’ve had it on the course a couple of times,” he says. “I just want to take better care of it and not whack it around.”

Brandt Bell, general manager of Village Streetrod, where Mike Salmon bought his cart, says the average price of the rides he sells is around $25,000, with a wait time of eight to 10 weeks for the carts to be customized.

After the initial outlay, costs are fairly reasonable. A gas cart can get 50 miles or more to the gallon. The oil needs to be changed every 200 hours. Day to day, electric carts are easier on the wallet, but they don’t have the range of a gas cart. The big expense is its battery, which can cost $1,000 to replace.

Insurance expenses depend on how the cart is used. In Florida, the state doesn’t require coverage if the cart isn’t street legal. But liability insurance for damage to the cart can range from $18 to $250 a year for one like Mike Salmon has. If the cart is street legal, it gets insured like a car, with annual premiums between $250 and $400. Those carts go faster — up to 25 miles per hour — but they also require seat belts, windshield wipers and a license plate.

Bob Ziarko says his convertible Corvette cart tops out at 26 mph, but he only really cranks it in surprise downpours. He has two other carts: a Chevy pickup truck for forecasted rainy days and a regular cart for, well, golf.

As an investment, these carts aren’t like classic cars. Brandt Bell says his street rods lose about eight to 10 percent of their value every 18 months — better than the new car — like depreciation on a standard golf cart. The resale market depends a bit on luck. Ziarko found his yellow Corvette in Washington state and had it shipped east.

But the carts have long lives. The first Village Streetrod, sold in 1996, is still on the cart path, as it were. Salmon said his purple Ford pickup, from 2008, is going strong. He also doesn’t miss the Beemer.

Read more “Money Game” by Paul Sullivan:
Here’s where the PGA Tour’s money goes
With caddie scholarship programs, we can shoulder the needs of those who carry our bags
What’s a professional golfer’s logo worth?