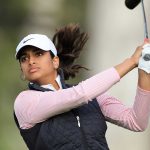 At just 17 years old, Megha Ganne is tied for the lead at the U.S. Women's Open.

Round one of the 2021 U.S. Women’s Open is in the books, and boy do we have a lot to unpack. Here are five things you absolutely must know heading into round two at Olympic Club.

After round one of the U.S. Women’s Open, three players sit tied atop a packed leaderboard at four under: 33-year-old Mel Reid and 17-year-old Megha Ganne..

Reid took advantage of the relatively calm conditions on Thursday morning, carding five birdies and one bogey on the last to take the early clubhouse lead. Her four-under 67 was the score to beat until Ganne surged on the back nine.

Ganne got off to a hot start going out in 32 with birdies on Nos. 2, 4 and 8. Her back nine got off to a rough start with a bogey on 11, but she recovered with a birdie on the par-4 12th hole. Two more birdies on holes 15 and 16 gave Ganne a brief lead at five under, but a bogey on 18 brought her back down to earth (sort of).

Ganne’s round was just one shot off the course record for an amateur at Olympic Club. Not too shabby for a day’s work.

2. Brooks has a bigger influence on the LPGA Tour than you think

Reid, who’s been playing well of late on the LPGA Tour with a T9 finish at the Bank of Hope LPGA Match Play last week and three top -20 finishes on the year, said she texted and FaceTimed with Koepka ahead of this U.S. Women’s Open.

“We had a long conversation and FaceTimed for an hour on Tuesday night,” Reid told reporters. “What he told me was, I thought, invaluable.”

Although Reid wouldn’t reveal exactly what she and Koepka discussed, whatever he said to her it clearly worked.

3. The rough is as rough as it looks

As with any U.S. Open, the rough at Olympic Club is fluffy to put it mildly. All week long, players have commented on how difficult it’s been to advance the ball if you land in the rough.

Lydia Ko said that if she lands in the rough she’s going to “grip it tight and hope for the best.”

Rumor has it the maintenance crew trimmed it just a bit early this morning, but escaping the thick stuff unscathed is still a tall task for these women, especially amid the backdrop of major pressure.

The 5th hole at Olympic Club played the most difficult with a scoring average of 4.51. Just 10 players out of the 156-woman field birdied this hole while 64 players made bogey or worse.

This hole is particularly difficult when it comes to the second shot because the it’s slightly downhill and downwind. That makes going over the green a real risk.

If players are going to miss the green, they’re better off landing short and left rather than long. Otherwise they face a difficult recovery and will struggle to make par, like so many did today.

5. The leaderboard is stacked

If you missed the first round of the U.S. Women’s Open, you missed a stellar leaderboard develop. After round one, some of the game’s biggest names are jockeying for position. With 21 players within four strokes of the lead, it’s really anyone’s game — meaning we’re in for an exciting few days WITH primetime coverage of the event.

Round two of the U.S. Women’s Open will air on Golf Channel starting at 7 p.m. ET tomorrow, and featured group coverage can be found on Peacock and uswomensopen.org starting at 11:28 a.m. ET.