Your guide to 17-Mile Drive: The 17 coolest sights on golf’s most scenic roadway

After Magnolia Lane, it’s the most storied road in golf. But unlike the shady entryway to Augusta National, 17-Mile Drive is open to the public and leads to more than a single destination on its winding path through Pebble Beach. To tour California’s oldest toll road — now $10.50 per vehicle, up from 25 cents per person in 1901 — is to roll past lavish manses and historic landmarks, cultural signposts and scenic overlooks, never mind the remarkable golf courses. Buckle up and enjoy the ride!

1. SHEPHERD’S KNOLL This scenic overlook was named for railroad executive Abraham D. Shepard. An early map got the spelling wrong, and the error stuck. Don’t be misled by the misnomer; it’s a place for gazing (splendid Monterey Bay), not grazing (no sheep).

2. SPANISH BAY BEACH Before it became linksland, this coastal swatch housed a sand-mining operation, the output from which was used to shore up the famous whitesand beaches of Waikiki. 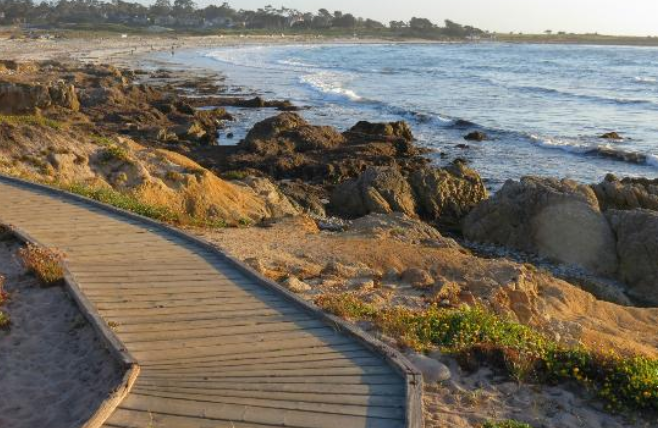 4. POINT JOE Forget sucker pins: This is a sucker point. Maritime records show that many ships foundered here in the 1700s and 1800s, steered to their doom by captains who mistook Point Joe for the entrance to Monterey Bay.

5. BIRD ROCK Ah, the scenery. Oh, the stench. During long dry stretches, this aptly named outcrop gets caked in so much guano, it merits bringing nose plugs along with your binoculars.

6. FANSHELL BEACH OVERLOOK On one side of the road is a craggy curl of coastline off-limits to people during spring seal-pupping season. On the other side are the well-groomed fairways of Cypress Point, off-limits to almost everyone, always.

7. THE LONE CYPRESS This iconic tree may be more than 250 years old…and it still works a day job. “Lone Cypress is the corporate logo and trademark of Pebble Beach Company,” a sign reads, adding that photos or renderings of the tree for commercial purposes “cannot be taken or created without written permission” from the company.

8. LOCATION SHOT There are horses for courses… and horses for movies, like the steed ridden along the 14th hole at Pebble Beach Golf Links by Elizabeth Taylor in 1939’s National Velvet, one of many films shot in the area.

9. GHOST TREES When locals here speak of “Ghost Trees” (or “Ghost Tree”), they either mean the bleached white, dead Monterey cypress trees along this haunted-looking stretch of shoreline, or the deadly big-wave surf spot that breaks offshore.

10. THE GINGERBREAD HOUSE Noted artist-turned-architect Pedro de Lemos designed this whimsical cottage for himself in the 1940s. In 1962, when the surrounding land was used for Spyglass Hill, the Gingerbread House became the home for successive Spyglass greenskeepers.

11. STILLWATER COVE In the late 1800s, pre-Pebble Beach Golf Links, 17-Mile Drive ran hard along the water at Stillwater Cove and was flanked by souvenir stands selling seaside collectibles. On a horse-drawn coach ride in 1891, President Benjamin Harrison stopped to buy a trinket with a $10 bill, but the vendor demanded “real” money, forcing Harrison to rummage through his pockets for coins.

12. THE LODGE AT PEBBLE BEACH As you pass the turnoff to the Lodge, consider the many notables who have graced its rooms, including Frank Sinatra, who late one evening sucker-punched a well-intentioned soul in a fit of rage after being told that dinner was no longer being served.

13. PESCADERO POINT If you spy a spectral figure in a white evening gown drifting down the center of 17-Mile Drive as you cruise past Pescadero Point, she might well be “The Lady in Lace,” an oft-sighted apparition around these parts.

14. CHINA ROCK The discoloration on many of the rocks here dates to the late 1800s and was caused by cook fires from a Chinese fishing village, one of many that dotted the Monterey coast.

15. CYPRESS POINT LOOKOUT Just beyond the famously exclusive club of the same name one finds a famously exhilarating overlook, with million-dollar views that stretch south to Big Sur.

16. CROCKER GROVE There are only two native Monterey cypress forests on earth. One stands a short drive south, in Point Lobos State Park, which resembles Cypress Point minus the golf course. The older, larger one looms here, a natural cathedral equally magical in the gloaming or in dappled morning light.

17. GENE HACKMAN’S HOUSE The rich are no different from the rest of us; they just require more floor space. Witness the 12,000-squarefoot seaside spread that sits behind Pebble’s 10th green and once belonged to the actor Gene Hackman. As Pebble caddies like to note, it fetched $27 mil in 2015, which would get you about 51,000 PBGL rounds — excluding caddie fees.