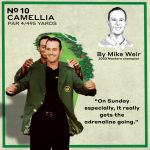 AUGUSTA, Ga. — Can you believe this Masters leaderboard? Jay Brunza is having some week.

That is Dr. Jay Brunza, a clinical psychologist in his mid-70s and a retired Navy officer. Brunza worked extensively with, and caddied some for, Tiger Woods during his extraordinary amateur career.

He continues to work with amateur golfers and also with Dylan Frittelli, the whippet-thin 30-year-old South African golfer of Italian descent who has been playing the PGA Tour so effectively for the last couple years. Frittelli won the John Deere tournament last year.

When the first round of this 84th Masters wrapped up mid-morning on Friday, Frittelli was (with company) on the top of the giant leaderboard by the 18th green. (Yes, it’s still being operated.) He had an opening 65. That’s seven under! Woods was three shots back, with a first-round 68.

Thomas Garbee, a former Navy golfer who graduated in May, was sneaking in looks at the golf between classes. He’s in the Marine Corps, still in the classroom, and when his studies are over he’ll be a combat engineer. He worked with Brunza as a Navy golfer.

Garbee offered this insightful play-by-play via text: “Frittelli, on the tee shot on nine, stood behind his ball, eyes closed, took a deep breath, pumped it over the corner.”

“He’s focused on his breathing,” Garbee said. (His texts are lightly edited here.) “That’s what Jay really teaches. You breathe in a pattern. In for four, [eyes closed]. Pause. Out for four, opening your eyes. He wants you to picture the shot you’re about to hit as if you’re on your favorite range, in an effort to put yourself in a comfortable setting.”

Scores of other golfers do similar things. Jason Day closes his eyes before playing many shots, his eyelids fluttering, as he imagines the shot. That approach is a cousin to what many expecting mothers are told, to close their eyes in anxious moments and transport themselves to their “special place.”

Throughout his career, Tiger’s focus on breathing has been obvious. He has focused on trying to steady his heart rate in stressful moments. It was interesting, watching his amateur playing partner, Andy Ogletree, on Thursday. Ogletree was playing one of the most meaningful rounds of his life — first round of the Masters, with Tiger Woods (and British Open champion Shane Lowry). But you could see he had his breathing, and his nerves, under control, even while acknowledging the stress he was playing under. He said he could barely get the ball on the first tee. But he did. Mind over matter (or Masters), is a beautiful thing.

Dr. Brunza works with different college teams. He met Frittelli when Frittelli was playing college golf at the University of Texas, from which he graduated in 2012 with a degree in geology. Asked to describe what he and Dr. Brunza work on after his win at John Deere, the golfer summed it up in two words: mental clarity.

Garbee’s own two-word summation of Dr. Brunza’s impact on his golf is also telling: keep breathing.

Check out the leaderboard for continued scoring and, in a manner of speaking, Jay Brunza updates.

'You learn about things': Why Bubba Watson's feelings about Augusta National have evolved