WATCH: How a lesson from a long-drive pro had me hitting 300-yard bombs

“You know what your problem is?” Wes Patterson said. “You swing as if you’re trying to hit the fairway.”

We were standing in a lonely swatch of Arizona desert, in a setting that looked fit for nuclear weapons testing. But I was trying to generate a different kind of blast.

With Patterson as my teammate and informal swing instructor, I was gearing up for a pro-am competition in advance of the Ak-Chin Smash in the Sun, the season-opening event on the World Long Drive tour.

The range where we were working was a wide expanse of hardpan. But in less than an hour, we’d be set loose on the grassy long drive grid, going toe-to-toe against other long-drive teams.

There wasn’t much time to turn a middle-age peashooter into a power hitter, so Patterson was trying to keep it simple for me.

His swing tip was like something out of Dr. Strangelove: He told me to stop worrying and learn to love to bomb.

“Trying to hit the fairway is not the point here,” he said. “The point is to swing as hard as you can and hit the s— out of the ball.”

That’s easy to say for a guy like Patterson, a 30-year-old, Gumby-limber ex-collegiate baseball star who is the 14th-ranked long driver in the world. He can fall out of bed and hit it 400.

It’s harder to do for a guy like me, a 52-year-old desk jockey with a homemade swing and the flexibility of a corpse in rigor mortis. On a good day, when I catch one, it goes about 250.

Watching me hit the first drives in our warm-up session, Patterson had winced. 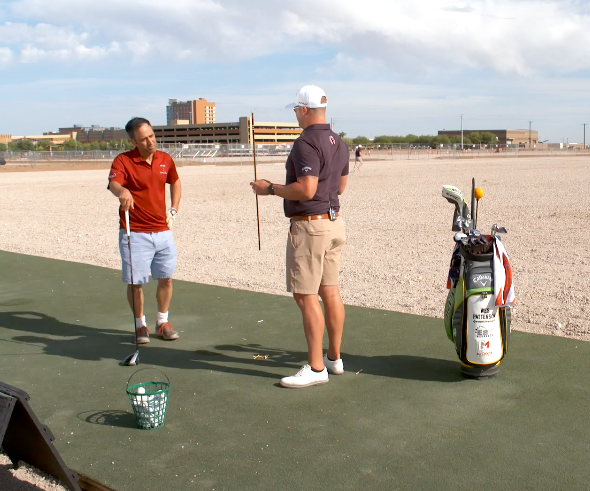 School is in session: The author, left, with his long-drive guru, Wes Patterson.

Of the many problems he saw, the most glaring was this: minimal hip and leg action. My swing was all arms, a half-hearted turn over a lifeless lower body.

I could hit it straight that way. Kinda, sorta. But at what cost? I wasn’t tapping into my greatest source of power. What I needed to do, Patterson said, was initiate my downswing by clearing my left side, creating more separation between my hips and shoulders: the so-called X-factor.

“It’s a crucial move for us long drivers to create more speed,” Patterson said. “But it also works for everyday golfers who want more yardage.”

Best part was, Patterson added, it didn’t have to come at the expense of precision.

Executed in proper sequence, with the hips exploding open, followed by the shoulders and the arms, the move would shallow out my swing and help get the club on plane. I wouldn’t only hit it farther, I’d have a better shot at finding the short grass.

I took a few more shots, trying to bump my left hip forward as the trigger to my downswing, then rotating forcefully to the left. It felt strange, which is how it often feels in golf when you’re doing something right. The results were almost instant. Within three swings, my lazy fade had turned into a penetrating draw.

We had a video crew on hand, so I whacked a few more drives and watched the replay. My swing looked to me to be as unsightly as ever: across the line at the top, with a hang-on finish, and all the speed at impact of a molasses spill. But, as Patterson pointed out, at least I was starting to clear my hips.

“I think that’s about as good as we’re going to get out you for now,” he said.

Enough with the practice. It was time to hit the grid. 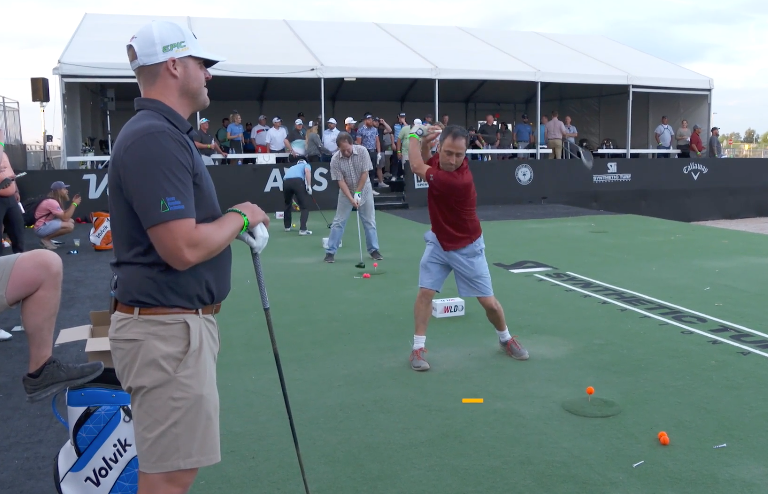 The author puts his new technique to work.

A professional long drive stage is a gladiatorial arena, with a thumping soundtrack and grandstands jammed with rowdy fans — an intimidating venue that made the 60-wide-yard grid look as slender as a sidewalk. There were 13 teams. Ours was slated to go second-to-last.

One after another, I watched my fellow amateurs take their hacks, their distances all posting on a large digital scoreboard. Most competitors topped out at about 280 yards, the most prodigious hitter being a former high school golfer in his early 30s who spanked one up the center, 308 yards.

Our team’s turn at last. We were all given four balls; the longest shot that found the grid would count.

My first drive was a slight block that barely stayed in bounds: 258 yards up the right side.

I swung again, spinning my hips at what felt to me like warp-speed: 282!

“What are you afraid of?” Patterson called out. “Really fire those hips!”

A third try, this time with such effort I thought my spine might splinter. Impact produced a sound with which I was not familiar: a deep, percussive oomph of a shot struck hard in the center of the clubface. A high, tight draw, straight down the middle.

A few heartbeats later, the result flashed on the scoreboard.

A hoot from Patterson, who rushed up to high-five me. Incredulous looks from spectators in the crowd.

If there weren’t video evidence, I still wouldn’t believe it: 316 yards, the longest amateur drive of the competition.

Sure, I probably got some roll. But how much? I can’t say.

The ball flew so far, I didn’t see it land. 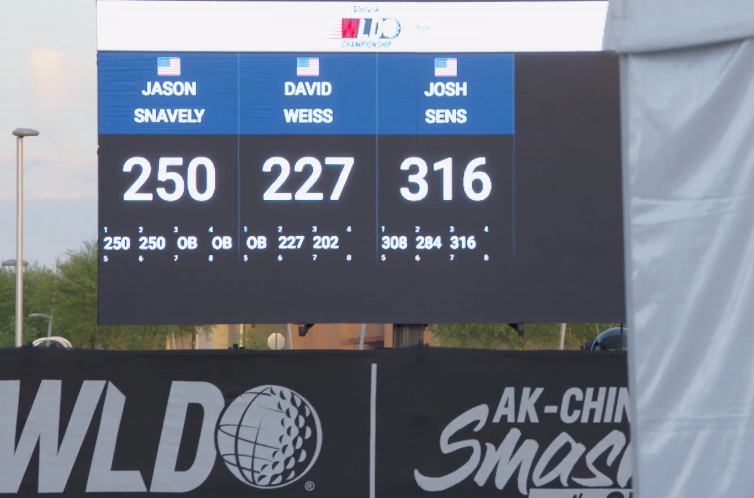 The Tao of Brooks: 7 lessons we can learn from Mr. U.S. Open
Go to mobile version