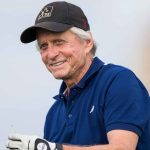 Michael Douglas says he took up the game late in life.

The star of the Netflix hit show The Kominsky Method is 76, a number roughly equivalent, in feet, to one of his pal Jack Nicholson’s gimmes.

G: Did you play golf as a young kid with your dad, Kirk Douglas?

MD: My father lived in Palm Springs and he tried to get me on the golf course, but I was always intimidated. I had a wicked slice. I got him once right in the crotch, when I was about 13 or 14, and that did it for me for a while. At about 45, I took up the game with my friend Jack Nicholson.

G: Every celebrity golfer I interview seems to have a Jack Nicholson story. Back in the day, who’d win in a match between you two?

MD: You couldn’t be competitive with Jack because he had a unique way of scoring. Whenever he got on the green, whether he was 10 feet or 80 feet away from the cup, he’d just say, “Hey, throw that birdie putt back here” and take a gimme.

G: The closest I can find to a golf scene in any of your films is the one in Falling Down, when you pull out a gun and start hassling a pair of pastel-clad geezers on a country-club course.

MD: Those are the kind of days when you just love the business you’re in, making movies where you can spend the morning working on your chipping game and the afternoon blowing up the golf course.

G: Your wife, Catherine Zeta-Jones, plays golf too. That had to be a nice surprise for you when you first started dating.

MD: That was the closer right there. I used to go out on weekends and see couples out on their golf carts together and think how lucky they were. She’s a dancer and has great form.

G: She says she can kick your butt on the course. True?

MD: Not true. Maybe one day, but not yet.

G: Do you gamble when you play golf?

MD: I played a couple of times with Michael Jordan, and I remember being a fool once and accepting one of his bets on a putt. He wanted to make it some crazy amount — in the thousands. I’m not a big gambler. I lined up the putt and, over and over, Jordan starts ripping the Velcro on his golf glove. I was like, “What are you doing?!” And he goes, “Look, man. If I can make a free throw with 20,000 people screaming at me, you can make a putt with me making a little noise.”

G: Rank the following from hardest to easiest: acting, producing, chipping and putting.

MD: Believe it or not, I would say acting is the easiest. Putting comes next, producing comes third, and chipping is the hardest without a doubt. I still play off the white tees, so I’m doing a lot more chipping than I used to. I’m 76. I can’t get it on the green like I used to.

Shop our selection of the latest footwear