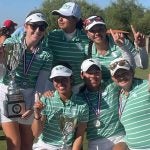 The University of North Texas and Audrey Tan (bottom left) captured the top prizes at the inaugural Barstool Sports Let Them Play Classic.

It has been a remarkable 10 days for women’s college golf. Last Wednesday, the NCAA controversially cancelled the Division I Women’s Golf Championships regional event in Baton Rouge, La., without a single shot being played. The reason? The course has received over seven inches of rain, and though it was deemed playable, it wasn’t “championship level.”

So, in lieu of qualifying on the course, the top six-seeded teams (LSU, Ole Miss, Baylor, Oregon, Maryland and Alabama) of the 18 onsite and top three-seeded individuals were selected to advance to the national tournament, abruptly ending the season for the dozens of players left on the outside looking in. A video of an NCAA official’s announcement of the cancellation quickly went viral on social media.

Fast forward to yesterday, Friday, and Audrey Tan being crowed the inaugural individual champion of the Barstool Sports Let Them Play Classic, where her team, North Texas University, also claimed victory at an event that didn’t even exist just over a week ago.

“I’m so happy. I really could not have asked for a better week,” Tan told GOLF.com. “To have the opportunity to play, and finish out the season playing, I’m just incredibly grateful to be here.”

Riggs has one of the largest social followings in the golf media space, with an audience of more than a quarter-million on Twitter alone. As soon as Riggs got wind of the situation in Louisiana, he knew he wanted to help. As a recent Arizona transplant, Riggs’ first call was to Troon, a Scottsdale-based golf club management company with more than 630 courses in its portfolio. With an assist from Kris Strauss, Troon’s SVP of sales and marketing, and his team, they soon honed in on Whirlwind Golf Club — a 36-hole facility in Chandler, Ariz., located about 20 miles south of Phoenix.

The next day (last Thursday), Riggs made his own announcement (see video above), cheekily parodying the viral video of the NCAA official’s cancellation on the clubhouse steps, inviting the 12 non-advancing teams and select individuals from the regional event to what he dubbed the #LetThemPlay Classic. Barstool committed to covering all expenses, including airfare and accommodation, and worked with the NCAA to ensure quick compliance clearance. When the NCAA signed off on the event last Friday, it was all systems go.

A total of 13 teams (Tulsa, Sam Houston State, ETSU, University of South Alabama, Houston, Quinnipiac, South Dakota State, Jacksonville State, Mississippi State, North Texas, Oregon State, Purdue and ECU) were represented at the tournament, a 54-hole event that was played on Thursday and Friday. Though the results have no bearing on this year’s Division I NCAA Women’s Golf Championship (the individual stroke-play portion of which is already in progress at Scottsdale’s Grayhawk Golf Club), that was never the point.

“I just want them to have the memories,” Riggs told GOLF.com. “I want them, when they look back in a week, or in a year, or 10 years, on their college golf careers, I want them to remember that they went out like this. They’re going to have photos, they’re going to have videos, obviously their own personal memories, and that’s better than ending, as [Barstool personality] Frankie Borrelli and [ESPN’s] Scott Van Pelt said, in a parking lot.”

It’s fitting that the event was staged at Whirlwind, because that’s essentially what the last week has been for Riggs. From confirming commitments, securing the venue and housing and feeding the teams to acquiring signage, designing a logo and merchandise and working with the NCAA, Riggs and the Barstool team pulled it off in record fashion.

“It was a very collaborative effort,” Riggs said. “People wanted to get it done. It’s amazing what people do when they feel like they’re doing the right thing and for a good cause.”

The impact of what Riggs and his team accomplished over the past eight days can be summed up nicely by one of his post-tournament, Saturday morning tweets: “They played.”