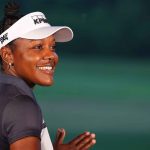 Mariah Stackhouse is playing in her hometown for the first time as a professional at this week's KPMG Women's PGA Championship.

Now 24 and a five-year veteran on the LPGA Tour, Stackhouse this week will enjoy yet another first: At the KPMG Women’s PGA Championship, Stackhouse will, for the first time, play a professional event in front of her hometown crowd in Atlanta, Ga., at storied Atlanta Athletic Club.

“I’ve never as a professional been able to sleep in my bed for a tournament,” Stackhouse said during a recent interview. “The LPGA has not been in the Atlanta area in over 15 years, so most of my friends from home have never seen me play in a professional event. And it’s not always easy for my parents to get around and travel. So I’m just happy to be at home.”

Unlike many of her peers, for Stackhouse, the pressure of a major-championship week goes beyond a simple desire to play well. As the only full-time active Black player on the LPGA Tour, Stackhouse also shoulders the additional weight of added visibility and expectation week in and week out. But she welcomes the spotlight and the opportunity to champion the game’s diversity initiatives.

“When I think about myself at this moment, as a Black player with full touring status, I try to always conduct myself as best as possible, play golf and always be open and approachable, which I think is something that you find with most players on the LPGA,” Stackhouse said. “They understand the importance and the need for fan support and for people to love to watch us play in order for us to be able to grow our tour.

“And you can’t [just] say it,” Stackhouse continued, referring to how to promote a more inclusive environment in golf. “It has to be seen. And in order for that to be seen, those of us that are there need to be visible. And so I think you see us willingly embrace that role.”

Stackhouse says she’s encouraged by the growing number of female minorities in competitive high school and college golf programs, and that supporting their efforts — whether it’s via a quick group Zoom, a speaking engagement or an event appearance — is critical to keeping the positive momentum going.

Another pillar of support for Stackhouse is KPMG, one of her sponsors and the title sponsor of this week’s major championship. The KPMG Future Leaders Program, which offers college scholarships and high-level mentorship opportunities to 22 high school seniors each year, is a favorite of Stackhouse’s, because she’s had the opportunity to watch some of the initial recipients graduate and flourish.

“I remember meeting each and every single one of those girls and watching them go into college that fall,” Stackhouse said. “It’s like, ‘Wait, what? They’re graduating?’ Seeing the impact of the work that you’re putting in on the other side now as they either go to grad school or into the working world. It’s incredible to see. And I’m always grateful to be a part of that.”

This week, KPMG is helping to make an impact at the local level with the Birdies for Books initiative. For every birdie recorded during the tournament, KPMG will provide 10 books to underserved school districts in the Atlanta area.

“If we all get our putter hot and rolling, we could really, really make an impact on Atlanta-area schools,” Stackhouse said with a smile.

A hot putter would help her position on the leaderboard, too.

Whatever happens, Stackhouse will have the fans squarely in her corner.