What one golfer learned playing every major venue (all 119 of them!), from the hardest test to the toughest get

In the 159 years between the 1860 British Open at Prestwick Golf, in Scotland, and the 2019 Open Championship at Royal Portrush, in Northern Ireland, 119 different courses have played host to what we now consider to be golf’s four major championships: the Masters, the PGA Championship, the U.S. Open and the Open Championship. You could fact-check this on Google. Or you could confirm it with Joey Hines.

It took him nearly half his life, but Hines, who is 60 and the director of golf at Cape Fear Country Club, in Wilmington, N.C., has pulled off a feat that no other golfer is known to have equaled: He has played every major championship course in the world.

The quest began for Hines in 1990, when he landed a job at Northwood Club in Dallas. Knowing that Northwood had hosted the 1952 U.S. Open (winner: Julius Boros), Hines got to thinking, which gave way to an inkling that he was onto something, which evolved into a goal. As a junior, he had played Pinehurst No. 2, unaware that it had held the 1936 PGA Championship. Still, Pinehurst counted, so Hines had that going for him. Two major championship venues down. Only 117 to go. 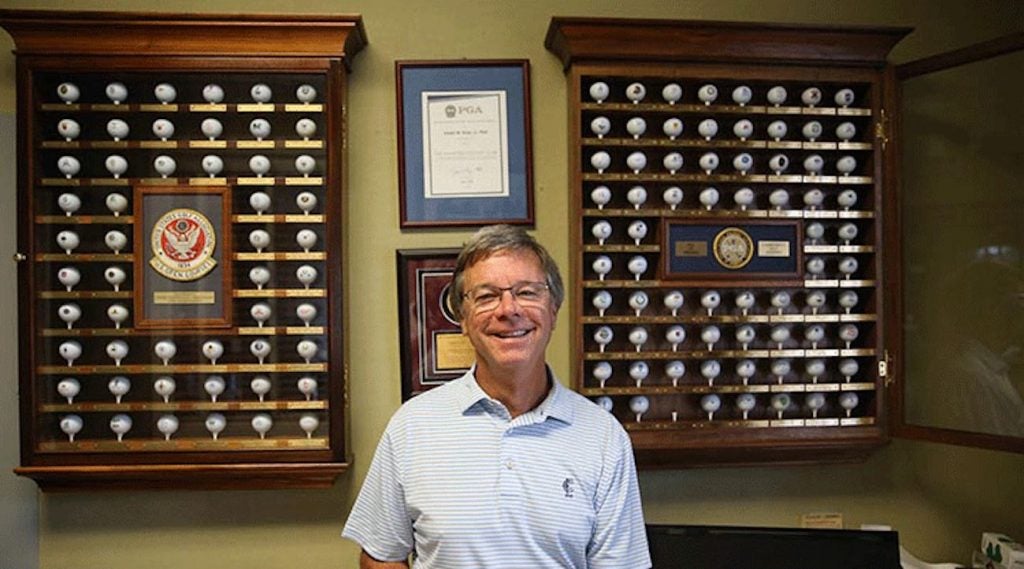 Hines played his best at two of the most storied courses: Pinehurst No. 2 and Medinah.
Joey Hines

Over the next 29 years, Hines worked through the list, traveling near and far to knock off courses, sometimes in batches, other times by way of surgical strikes. At every venue, he kept score and collected memorabilia. He also came away insights into the game he loves and many of the finest courses where it’s played.

In a conversation with GOLF.com, Hines shared some of his major takeaways.

Not that Augusta National didn’t take some planning, to say nothing of Shinnecock and Riviera. But no course presented the logistical hurdles of Chicago Golf Club (1897, 1900 and 1911 U.S Open), which has only 112 members and does not allow unaccompanied play. Do the math, and you understand why Hines found it to be “the hardest of them all to arrange.”

While Torrey Pines surprised him with its stoutness, and Shinnecock showed him that, even in relatively calm conditions, it was all the golf that anyone could eat, the toughest start-to-finish test for Hines was Bethpage Black (2002, 2009 U.S. Open; 2019 PGA Championship). “What challenged me most was the endurance required,” Hines says. “I was one-under through five, which isn’t bad, but then you get to numbers 8, 9, 10, and 11—I can’t even reach those holes. And then you start the turn back up toward the clubhouse, it just wears you down. I can’t imagine there’s a tougher walk in the game.”

Donald Ross. Alister Mackenzie. C.B. MacDonald. So many names in the pantheon of golf architecture greats, but for quality and quantity, Hines tilts toward A.W. Tillinghast. “You’ve got Winged Foot, Baltusrol, Bethpage, Philadelphia Cricket Club and on,” Hines says. “Looking at how he took the lay of the land and worked with it so beautifully in so many places, his designs just blew me away.”

You’ve got two choices — the Masters tees or the members’ tees. “And being the egotist I am,” Hines says, “I wasn’t going to play it all the way up.” This was in December, when the club keeps the rye-based golf course relatively wet. “My drives would hit a downslope and instead of bounding forward like you see on TV, the ball would go about six inches. It’s still a wonderful experience — you wouldn’t it for the world. But Augusta is Augusta two weeks out of the year. The rest of the year, it’s not the same course we see on TV.”

Though the firm, fast greens at Llanerch Country Club in Havertown, Pa. (1958 PGA Championship), gave Hines everything that he could handle, the staunchest test of his flat-stick came at another Pennsylvania course. You can probably guess the one. “There are lots of difficult greens out there in the world, but Oakmont, good lord,” Hines says. “They are everything you’ve heard about, and more.” 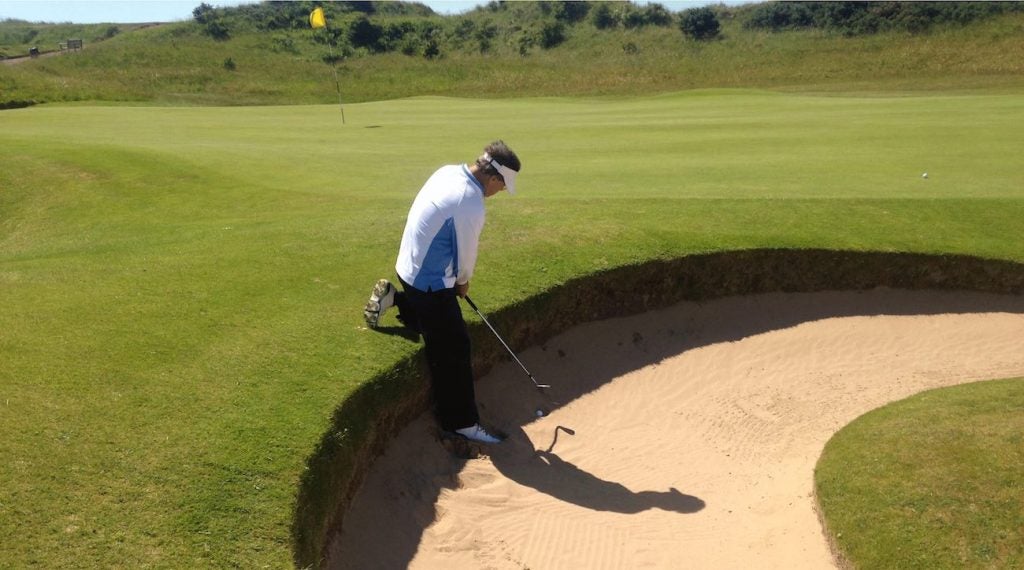 Decades pass, and even lofty venues slip under the radar. Hines encountered scores of sneaky-great layouts. But one that stands out vividly is Blue Mound Golf & Country Club, in Wauwatosa, Wis. (1933 PGA Championship). “It’s an old Seth Reynor, and frankly it just shocked me as to how good it was.”

The famous burger-dog at the Olympic Club (a hamburger shaped to fit and served in a hot dog bun) lived up to billing. “It’s like no burger you’ll ever have,” Hines says.

“Anything from Augusta National,” Hines says.

Though a 66 at Northwood was his lowest score, Hines says he probably played his best at two notorious bears: Medinah and Pinehurst No. 2. He shot 70 at both, highlighted by a hole-out for eagle from 100 yards on the 10th at Pinehurst. 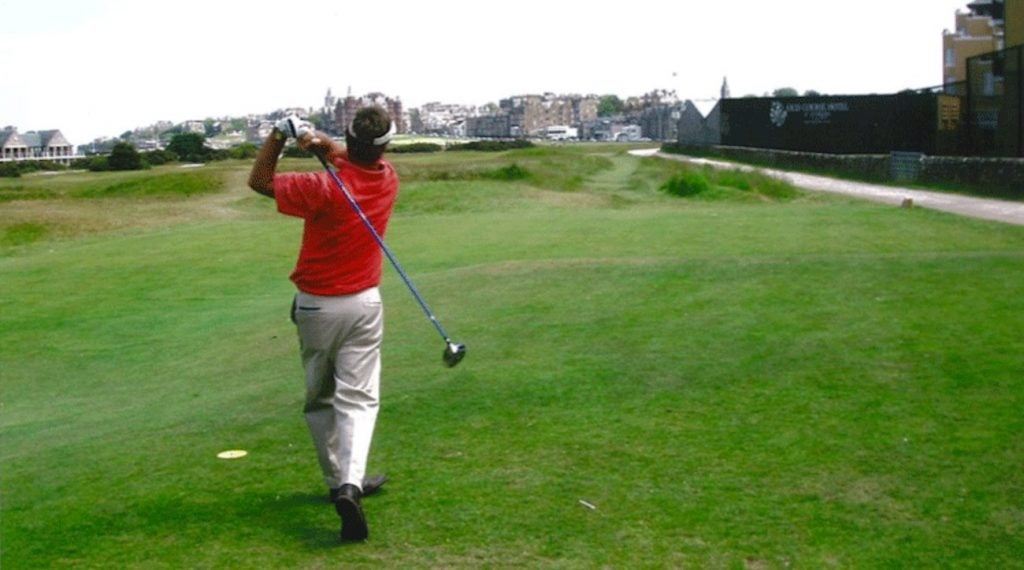 Is there anything more bittersweet than a hole-in-one without a witness? Hines made one on the 5th hole at Northwood, but that was during a late-day nine-hole outing, and he was by his lonesome. “No one to see it, and not official!” Hines says.

At long last, a chance to play Augusta National. First-tee jitters, and a less-than-perfect swing from Hines, who was wearing spike-less, lizard-leather shoes. The ball wound up in the pine straw, close to the 9th fairway. “I slipped badly,” Hines says. “I didn’t think that one through very well.”

SO, YOU’RE ASKING, WHAT DID THIS ALL COST?

“I was talking to [former PGA Tour pro and instructor] Bob Toski about all the courses I’ve played, and he said, ‘Wow, You must have about half a million dollars invested in all of this,” Hines says. “I said, If I do, my wife is going to want know where I got all that money and where her cut of it is.” Truth is, Hines didn’t keep an exact expense tally. “But with travel, greens fees, caddies and those kinds of things, it’s got to be north of a hundred grand. And worth every cent!”

Over the years, Hines’ list kept growing longer, as new courses were added to the major-venues list, including Chambers Bay (2015 U.S. Open) and Erin Hills (2017 U.S. Open). With the 2022 PGA Championship on its way to Trump Bedminster, in New Jersey, Hines will soon have another target. “I’m already starting to consider the best way to get out there,” he says. “And after that, who knows, maybe I’ll get started on every course to ever host a Ryder Cup.”