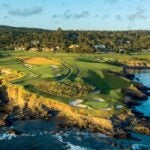 Pebble Beach will cost you a pretty penny, but by the time you play holes 6, 7 and 8, it will all have been worth it.

Many golf fans will salivate at visuals of the rustic, brutally tough, classic course that is Winged Foot this week. The U.S. Open host course is an A.W. Tillinghast design that is one of two Top 100 courses on property.

Unfortunately for you, you probably will never play it.

The private club is for members, their guests and once in awhile the greatest players in the world. But don’t fret. You can play a number of U.S. Open host courses all over the country, and generally the price isn’t back-breaking. Below is a list of U.S. Open courses and their corresponding greens fees.

Priciest (but maybe the best)

Often considered the greatest meeting between land and sea, Pebble is about as good as American public golf gets. And it is often on display via the U.S. Open. Pebble hosted the 2019 Open, where Gary Woodland triumphed, the 2010 Open, where Graeme McDowell won, the 2000 Open, where Tiger Woods made history, and countless others. It’ll cost you a pretty penny to play, but even before you finish the front nine you’ll have worked through one of the greatest stretches of golf holes on the planet. Worth it? Probably.

The new home-away-from-home for the USGA, Pinehurst has legitimized its claim as the Home of American Golf. And it has plenty of right to do so. A trip to Pinehurst should be more than just one round — there are nine courses on property — but would be underwhelming without playing the crown jewel No. 2. It will test your short game about as much as it tests your pocket book, but once again, it’s totally worth it. And you’ll probably never lose a golf ball.

The 2015 U.S. Open host had an inauspicious debut on the national scene, but with renewed greens, the reputation of Chambers is sure to continue rising. Play it as the sun sets and you won’t soon forget it. Better yet, you can do it for around $200, but never more than $275. In other words, play it twice for the same price as Pebble once. Not a bad deal!

Brooks Koepka may have made Erin Hills look tiny when he bombed his way to the 2017 U.S. Open, but rest assured this course is a brute. It is walking only and if you find the fescue you’ll have a wail of a day. But are you not up for the challenge? Located just north of Milwaukee, Erin Hills is a must-visit on any Wisconsin golf excursion, whether it starts or ends there.

The beloved munis (and best deals!)

This Long Island monster is there for the taking. It just helps to have a New York state resident with you. NY residents have early tee time booking preference, as well as half-priced rounds compared to out-of-state residents. Nonetheless, the most you’ll have to cough up for a round on the Black course is $150 for a non-resident playing on the weekend. You can do A LOT worse for that price.

Similar to Bethpage, it’s helpful to have a San Diego resident in your foursome, as they’ll get preference in booking tee times early. This annual PGA Tour track has become world famous and will host the 2021 U.S. Open, so play it now while you still can. It employs multiple holes that stretch out to the cliffy coastline just north of San Diego. Like Chambers Bay, play it at sunset and you’ll remember that round for a long time.

5 scariest shots at Whistling Straits, as attempted by 3 average golfers