Adaptive golf is on the rise. This instructor is at the center of that growth. 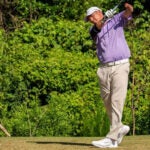 Jonathan Snyder is the director of golf for the United States Adaptive Golf Alliance.

You’ve probably heard it said that golf and life are a lot alike in the way they test your knack for overcoming obstacles. The comparison can seem like a tortured metaphor, until you talk to someone like Jonathan Snyder.

Snyder, 40, is the director of golf for the United States Adaptive Golf Alliance (USAGA), which is devoted to making the game accessible and enjoyable for people with disabilities. Snyder himself is an adaptive golfer, and a skilled one at that, routinely shooting in the 70s with a one-armed swing. Raised in North Carolina, the second oldest of seven children in a sports-mad family, Snyder was born with a left arm that ends just after the elbow, a trait likely caused by a rare genetic condition called phocomelia, though Snyder says that he and his parents never thought it crucial to find out for sure.

Snyder is one of an estimated 57 million people in the United States living with some form of physical or cognitive challenge; around 5.7 million of them already play golf. Snyder is one of many trying to grow that number.

Through the USAGA, which has 39 member organizations nationwide, Snyder has created teacher-training programs and established outreach networks with high schools, special recreation centers, park districts and golf facilities around the country. In the Chicago area alone, where Snyder now lives, he and his colleagues conducted nearly 10,000 lessons in 2019, a figure that dropped when Covid hit but remains robust.

Adaptive golf has momentum behind it. And just last week, it got another boost when the United States Golf Association, fulfilling a pledge it made in 2017, announced the establishment of the U.S. Adaptive Open Championship, a new annual national championship that will stage its inaugural at Pinehurst next July.

In the wake of that news, GOLF.com reached Snyder in the Windy City, where a busy season was winding down, to hear more about his background in adaptive golf, where he thinks the sport might be headed and whether, with the help of a new prosthetic, he might be adapting soon to a two-armed swing.

GOLF.com: First things first. How did you get into golf?

Snyder: I was a natural athlete growing up. My two main sports were baseball and basketball. But when I was 12, on a family trip to the mountains, my grandfather took me out to the course. I loved it so much, I begged him to take me out again. On the 2nd hole, a par-3, 118 yards, he handed me an 8-iron and I topped it. The balls rolled about 10 or 15 yards and my grandfather says, “Well, go and hit it again.” I did. It went in the hole for a birdie.

Talk about a hot start. How long was it before you started playing seriously?

Fair point. Did you start taking lessons? How did you go about improving?

At the time, I found it difficult to find instruction for my particular situation. So I was mostly self-taught. I knew my body. I don’t have a left wrist, but I have a left elbow and a left shoulder. So I studied the best players in the world. I knew it was going to be about me figuring out how I could make it work for myself. That’s what adapting to anything is. It’s about figuring out how to do it differently than others do.

When you were starting out, what were the prosthetics like?

That’s an interesting question, because I don’t know. My parents asked me when I was younger if I wanted one, and I said, “What’s it going to take for me to get one?” I knew it would be expensive and that we didn’t have insurance. I didn’t want to put those kind of constraints on my family. Beyond that, it never really came up. I was able to function at a high level without one.

How welcomed did you feel in the game? Did you feel like you were treated just like anyone else?

That kind of depended on which club I went to. There are always going to be people who judge a book by its cover. You see a guy with one arm or a guy missing a leg coming up to the tee and you realize they’re going to be playing in the same foursome, a lot of pros are going to think, “We better keep the ranger on them.”

Do you feel like attitudes and awareness have changed since then?

Absolutely. Regardless of your challenge, you should be treated the same. And that’s exactly what adaptive golf has done for me and for thousands and thousands of golfers across the country. There are so many individuals and organizations that deserve credit. The United States Blind Golf Association has been around for 76 years. The National Amputee Golf Association has been around for 75 years. You talk about trailblazers.

Is there any special philosophy or approach you take when teaching a differently abled person to play golf?

The main philosophy is to keep it fun. At the end of the day, it’s just a game. We play it for enjoyment. It’s not an easy for any of us, whether you have all your limbs or none of them. We try to instill a work ethic. Practice. But the right kind of practice. Positive and joyful. The other thing I’d say is that language is huge in adaptive golf. Let’s say you’re working with a sight-impaired individual and they hit a phenomenal shot, you don’t say, “Wow, you should have seen that one!” Or if you’re carrying a bucket of range balls toward a one-armed specific person, you don’t say, “Can you give me a hand?”

Has learning to play as an adaptive golfer taught you any lessons about the swing that apply to golfers of every kind?

The importance of releasing your trail hand. For many years, I used to hit a cut because I was holding on. It’s so important to be tension-free in the forearms and let that trail hand release.

We try to instill a work ethic. Practice. But the right kind of practice. Positive and joyful.

We understand that you recently got your first prosthetic.

Yes. A little more than a year ago. A company called Unlimited Tomorrow blessed me with it. They are using cutting-edge design and software from Siemens. It’s remarkable what they’re doing.

Can you play golf with it?

I’m going to attempt to, if we can get the articulation of the wrist just right, I fully intend to swing and compete with two hands on the club.

Speaking of competitions, the USGA has now established a national adaptive golf championship. How important is that for the sport?

What the USGA has done means the world to all of us. We’re so happy that our governing body is supporting our community. That’s something they’ve actually been doing for many years now. They’re not just now jumping on board. Hats off to them for doing their research. We know it’s going to be a phenomenal championship. And it’s just one of 22 adaptive golf tournaments that different people can compete across the country next year.

Do you have a good estimate of how many adaptive golfers there are in the United States?

I can tell you that 57 million Americans face some kind of unique challenge, and 5.7 million already play the game. There are also 11.3 million lapsed golfers due to injury or disability. These include our veterans who have gone to war and don’t think they can play golf. We try to seek them out and show them that they can still do it. They can still overcome the challenges that life has thrown at them.

Is there a Tiger Woods of adaptive golf?

I wouldn’t go so far as to name any one person. That’s another great thing about adaptive golf. We’re all in it together.