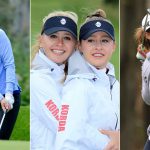 Michelle Wie (left), sisters Jessica and Nelly Korda (middle), and Lydia Ko make up three of the best storylines to follow at the 2021 U.S. Women's Open.

The 76th U.S. Women’s Open is set to begin at famed Olympic Club in San Francisco, Calif., on Thursday, June 3rd. Here are five storylines to follow as the star-studded 156-player field prepares to compete at the year’s second major championship.

Wie West is one of the biggest stars in the women’s game, and anticipation is always sky-high whenever she’s in the field.

Back in 2019, Wie West announced that she was stepping away from the game to recover from a lingering wrist injury. During her recuperation, she got married, did some broadcast work for Golf Channel and CBS and gave birth to her first child, daughter Makenna.

Wie West returned to competition at the LPGA’s Kia Classic in March. She missed the cut there, and at the two events she’s played since. But perhaps being close to home will generate some positive vibes. The Bay area is now home for Wie West. She lives in San Francisco and graduated from Stanford University, just 35 miles south. As a former U.S. Women’s Open champion, (Wie West won at Pinehurst in 2014), she can enjoy an exemption into the Open through 2024 — and we can’t wait to watch her tee it up this week.

Jessica and Nelly Korda and Ariya and Moriya Jutanugarn have a pretty cool accomplishment in common: they are two of only three sets of sisters who have won at least once on the LPGA tour. (The other duo? Annika and Charlotta Sorenstam.)

All four women are in the field this week, and while it looks like the Korda sisters are gaining an edge in the race for sister dominance (both Nelly and Jessica claimed wins earlier this year, and are ranked 4th and 12th in the world, respectively), Ariya made a statement with a win at the Honda LPGA Thailand just a few weeks ago.

Ariya, currently ranked 23rd in the world (Moriya is 35th) also has two majors on her resume: the 2016 Women’s British Open, and the 2018 U.S. Women’s Open. So which pair of sisters will make the biggest statement this week? Time will tell!

Inbee Park, winner of seven major championships, shows no signs of slowing down. The 32-year-old hasn’t won a major since the 2015 RICOH Women’s British Open, but has claimed four LPGA titles in the years since — most recently at the Kia Classic in March (that marked LPGA win No. 20 for Park). Majors — and especially the U.S. Women’s Open — seem to bring out the best in her game.

Not only has Park won two U.S. Women’s Opens (2008 and 2013), she’s finished in the top 10 a whopping nine times in 13 appearances since 2007. A win this week would mark U.S. Open No. 3 and major No. 8 — boosting her to No. 6 on the all-time major list, tied with Betsy Rawls. She’d also be one step closer to matching the all-time number of U.S. Women’s Open wins: four, a record held by both Rawls and Mickey Wright.

Lydia Ko, onetime child phenom, has now become, at age 24, one of the best comeback stories in the world of golf. Back in 2012, Ko took the LPGA Tour by storm. At the tender age of 15, she became the youngest-ever winner of an LPGA Tour event when she claimed the title at the CN Canadian Women’s Open. She was still an amateur at the time, and successfully defended her title the next year, once again, as an amateur.

Ko turned pro in 2014, and between 2014 and 2018 she won 13 times and ascended to World No. 1, a position she held for 84 weeks, until June 2017. But then: struggle. Equipment, caddie and coaching changes. Ko was winless for nearly three years between May of 2018 and April of this year, when she finally broke through and claimed the LOTTE Championship — her 16th career LPGA win. Since then, she’s had two top-11s in her last three events — positive momentum for a player who knows how to wield it.

San Francisco’s Olympic Club has a long history of hosting USGA championships, but this will be the first U.S. Women’s Open at the illustrious club. The men’s Open has visited a total of five times, most recently in 2012, when Webb Simpson captured the title. Since then, there’s been only one USGA championship played: the 2015 U.S. Amateur Four Ball.

Situated on a hillside overlooking Lake Merced, Olympic’s Lake Course is ranked 54th on GOLF’s most recent list of the Top 100 Courses in the U.S. Reputed as a course that demands shot-shaping, it’s sure to be a stern — and visually stunning — test.