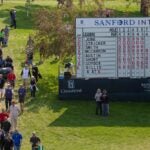 Fans will be permitted at this week's Sanford International on the Champions Tour.

The PGA Tour season wrapped up last week with Dustin Johnson winning the FedEx Cup — and in dominant fashion. But the “other” tours in golf had plenty going on, too. Here are three storylines you might’ve missed.

A journeyman gets a Father’s Day win

This year has not been kind to Brett Drewitt. That changed last week.

The 29-year-old journeyman won his first career Korn Ferry Tour event at the Lincoln Land Championship, carding a final-round 68 to secure a one-shot victory. Making the win all the more special is the fact that it came on Father’s Day in Drewitt’s home country of Australia.

“I was talking to my parents last night, and I was kind of thinking about how cool it would be to win on Father’s Day,” Drewitt said. “I didn’t say anything to my parents because lately my words have been coming back to bite me, but it’s a surreal feeling.”

The win came in Drewitt’s 116th career start on the development tour, and in a season in which he’d only made six cuts in 18 events coming into the tournament. But at Panther Creek Country Club, the putts finally started to fall.

“This year has been a roller coaster,” Drewitt said. “I just trusted that I still had it, even if it might not show in my stats. And then the putts started dropping and that’s just the way it goes.”

The ANA Inspiration is shaping up to be a steamy one with forecasts for the week projecting the temperatures in Rancho Mirage, Calif., to be well above 100 degrees throughout the week. Because of the extreme heat, the LPGA announced modified caddie protocols, allowing loopers the option of using a cart during competition. Players will still be required to walk.

“Projected temperatures next week will range from 105-115 and we are very conscious of the high heat,” the LPGA Tour told players and caddies in a memo. “(This year) has been the year of health and safety, and with that in mind, we will be allowing caddies to take carts for the week.”

But even with the modified protocols in place, not all caddies will utilize carts. And some players will not even use caddies for the week, such as Lindsey Weaver, who has been using a push cart for her clubs since the restart.

“When the LPGA gave us the option of not using caddies, I pushed my own clubs and I’ve been doing it for four weeks and playing pretty well so I didn’t want to change anything,” Weaver said. “I’ve gotten comfortable with it.”

Fans have not been on site for a PGA Tour-sanctioned event since the Players Championship was abruptly canceled in mid-March. That will change this week on the Champions Tour.

According to a report from the Sioux Falls Argus Leader, fans will be permitted on site at this week’s Sanford International on each of the three competition days, but there will be a number of safety protocols in place.

Fans will be required to undergo temperature checks before being permitted to the grounds, and masks will be “strongly encouraged, though not required.” Tournament organizers have also installed extra hand sanitizing stations and credit cards will be accepted at all concessions stands — which will serve pre-packaged foods — to limit cash transactions. In addition, autographs will be prohibited.

“It’s not a decision we entered into lightly or did with a cavalier mindset,” Sanford International executive vice president Micah Aberson told the Argus Leader of the decision to permit fans. “We did it working closely with our team of clinicians and infectious disease doctors. We took their best clinical expertise and married it with common sense, and that allowed us to unveil a tournament plan we think is going to be extremely effective.

PGA Tour commissioner Jay Monahan indicated two weeks ago that he was bullish on the prospect of reintroducing fans to the grounds of Tour events during the fall. The chances of that happening are likely contingent on how effective the Champions Tour plan turns out to be.

“We’re excited to show and demonstrate to others you can do this effectively,” Aberson said. “There’s no better venue than the wide-open expanse of a golf course to socially distance and enjoy the golf.”