‘It was totally out of character’: Erik van Rooyen issues apology for PGA Championship outburst 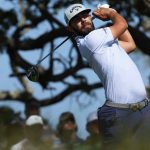 Erik van Rooyen has issued an apology on Twitter for his outburst at last week’s PGA Championship. The 31-year-old lashed out on the 17th hole at the Ocean Course during the second round, bashing a tee marker and breaking his club after his shot found the water.

“Hey everyone, I’ve been quiet on here whilst I’ve done some reflecting,” van Rooyen said in a statement. “My actions at the PGA Championship were unacceptable. I would like to apologise to my team, my sponsors, the PGA of America and the fans for letting you and myself down.”

Van Rooyen missed the cut at the PGA, posting 72-81 over the first two rounds. It marked his first career missed cut in a major championship.

“It was totally out of character for me, and it should not have happened,” he continued. “I will learn from this and do better.”