WATCH: Pro flips off cup after lip-out causes him to miss the cut 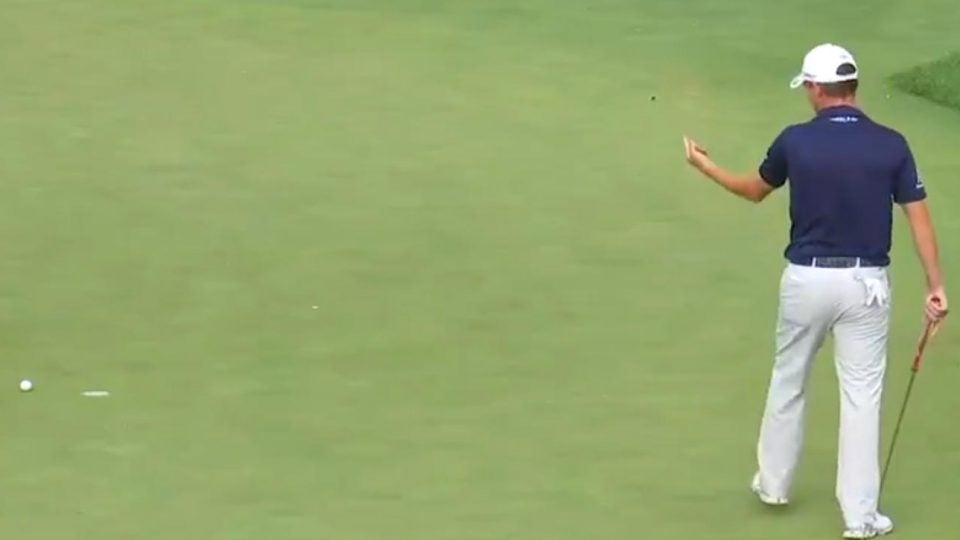 Emiliano Grillo reacts to a missed putt Friday at the Northern Trust.

All golfers know how frustrating the game can be at times (or all the time). Pro golfers tend to handle their bad breaks on the course better than us weekend hackers, which is why it’s sometimes refreshing when a pro temporarily loses his cool. Such was the case with Emiliano Grillo on Friday at the Northern Trust.

Grillo was caught on camera flipping off the cup after an unlucky lip-out during the second round. The incident went down on Liberty National’s 9th hole, Grillo’s final hole of the day. And thanks to a tweet from Skratch, we have video evidence.

In the video, Grillo stares down a birdie putt of about 15 feet. Once he makes his stroke, the ball appears as if it’s going to drop in the hole. Unfortunately for Grillo, it catches the left side of the cup and lips out, settling a foot away.

As soon as the ball stops rolling, Grillo faces the cup and raises his middle finger in frustration. Check it out below:

We don’t whether the young Argentinian pro’s “bird” was directed at the cup or his ball, but our money is on the cup. In the end, Grillo finished with a respectable 69 on Friday. While that was an improvement on his first-round score, it left him at even par, exactly one shot short of the cut line.

Whether or not his rude reaction was called for is up for debate, but one thing is certain: had the putt dropped and not lipped out, Grillo would be teeing it up in the third round at Liberty National. Instead, he’s heading home.