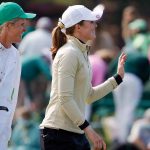 Emilia Migliaccio, with her mom as caddie, was still all smiles after losing the Augusta National Women's Amateur to Tsubasa Kajitani in a playoff.

AUGUSTA, Ga. — Emilia Migliaccio played Augusta National, in the Augusta National Women’s Amateur, on Saturday afternoon wearing Nike golf shoes on her feet, a Wake Forest cap on her head and, below its brim, her game face very much on. Two days later, the young novelist — Emilia, you may have heard, is also a writer — was back on the Wake campus, eating grapes, briefly cooling her jets and reliving her experience not so much as an elite golfer, but as a novelist.

She’s now played Augusta National three times in her 21 years. In 2019, she played a fun round there, as part of the ANWA, but she hadn’t qualified to play in the third round of the 54-hole event, the only one played at Augusta National. Her round on Friday was a “completely different experience,” knowing she was preparing for a competitive round. As Bobby Jones, the great amateur golfer and writer, once said, “There is golf and there is tournament golf, and they are not at all the same thing.” Emilia said that Saturday round was not like any round she had played before, anywhere, and she has played thousands of rounds on dozens of courses.

“The fairways are undulated but the grass is even, so you’re walking a hilly course and the shoe-to-turf contact is perfectly flat, because the turf is so firm and the grass is cut so short,” she said by phone Monday afternoon.

You might be thinking: I have never heard Augusta National described that way before. No, you haven’t. Well, what do you expect from a golfer-writer such as she? Emilia’s nearly 500-page novel, Just an Illusion, is about a young couple, Jessica Farrell and Blake Donovan. “There are things in their past, things that they have not dealt with, things they have not been honest about, and they find out that if you don’t deal with your past it will come back to haunt you.”

Back to the Augusta Women’s Amateur. The member-starter gave her “a very solid bump” on the first tee. Now driving, Emilia Migliaccio. She caught the drive “one groove low.” It went longer than a good one and tumbled down the fairway. “That happens more often than not in golf, good enough is good enough,” Emilia said. “It’s an important quality in golf, and life.”

She hit a gripped-down wedge from 120 yards to about five feet and stood one under through one. She could write 10 pages alone on that first hole, more if she wrote about her mother-caddie, who played golf at the University of Arizona with a fellow Swede, Annika Sorenstam. Emilia played the next 17 holes in one under, 70 for the day. She was the leader in the clubhouse and, at the end of 54 holes, she was tied for the lead with 17-year-old Tsubasa Kajitani of Japan. They had both shot one over for the three rounds, the first two of which were played at nearby Champions Retreat, followed by a Friday practice round at Augusta National.

On Friday night, there was a dinner for the competitors at the club. Emilia was planning to go with her mother, Ulrika. At the 11th-hour, mother generously offered to give up her spot so that Emilia could go with her boyfriend, Charlie Doran, also a senior at Wake. He once shot 77. He’s a political science and philosophy major. After graduation, he’s planning to work at Bank of America. Emilia has an internship lined up at Golf Channel. Emilia’s parents and her sister all have the science gene. Emilia likes to write. But she got a good writing tip from her mom: “A long sentence does not equal a good sentence.” Words to live by.

She likes Jane Austen. She likes Jeannette Walls. She likes Arnold Palmer, a legend at Wake Forest and Augusta National.

“When I was 10 I sent him an email and asked for his autograph,” she said. “He sent back a signed photo. You would know it was Mr. Palmer without the photo. The signature is “perfect, beautiful.”

“When you hear about Arnold you’re reminded of his humility and integrity — the values that everyone should have,” she continued. “People don’t talk about his golf, but who he was as a person.”

Emilia made a great 4 on 18 when she played it for the first time, getting up and in from 105 yards after driving it in a fairway bunker. One of the many joys of the Women’s Amateur is to see the fairway traps playing as real hazards, as they were when Jones laid out the course with Alister MacKenzie. Tsubasa, in sudden death, made a birdie on 18, the first hole of the playoff. It was beautiful, perfect. So was their post-round exchange, despite the language differences. Arnie and Bobby surely would have been proud.

“It’s all about you in professional sports,” Emilia said. “I have so much more to offer, and many more things that I love. Collaboration is a big part of what I want to do. I don’t want to stress about my backswing in the middle of the night. I don’t know how Bobby Jones did what he did but I’d like to find out.”