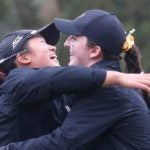 This week in Bamberger Briefly, Michael Bamberger offers five pieces about where golf is in this odd spring, with the PGA Tour on deck for next week. Part I: Bryan Zuriff, Match II Producer. Part II: Superstars Among Us. Part III: Golf and Social Justice

On March 12, things were just going swimmingly for Kim Lewellen and the women’s team she coaches at Wake Forest, the No. 1-ranked squad in the country.

The Deacons were in Arizona for a tournament, playing well and feeling good. They had just won Darius Rucker Intercollegiate event in Hilton Head by 26 shots. A Wake player, Emilia Migliaccio, had won the individual title.

In May, the Deacons would have a chance to win the NCAA title, and put their wild overtime loss to Duke in last year’s event in the rearview mirror of the team bus.

Are we having any fun?

Wake Forest’s men’s golf team is storied and then some. The all-time roster includes Arnold Palmer, Curtis Strange, Webb Simpson and other luminaries. But the women’s program is on a roll. Lewellen, the longtime women’s golf coach at the University of Virginia, was named the Deacons’ coach in June 2018, succeeding a legend, Dianne Dailey, who had coached the Wake team for 30 years.

In April 2019, a Wake player, Jennifer Kupcho, won the inaugural Augusta National Women’s Amateur. Lewellen was there for the final round, her first time at Augusta National. Sunday night, she and Kupcho flew to New York and on Monday Kupcho made an appearance on the Today Show and taped an appearance of Tonight Show with Jimmy Fallon. FUN!

On the Sunday between Kupcho’s win and their unexpected trip to New York, Lewellen did some subtle recruiting at the finals of the Drive, Chip & Putt competition at Augusta National. “You can’t talk to the kids or their parents,” Lewellen said in a recent phone interview, citing recruiting rules. But you can make your presence known. Oh, and she did that all right.

Lewellen wore a Wake belt, a Wake hat and a shirt with four giant letters on it: W-A-K-E. “I was a walking billboard!” she said. Wake Forest women’s golf was in the air: Kupcho had just played outstanding golf to win the Augusta National women’s title.

Fast forward 11 months, to Thursday, March 12, 2020. The Wake women are in Arizona for a spring-break tournament. It’s the same day as the first round of the Players Championship. The news came in fast waves. The Arizona event, the rest of the season, the Augusta National Women’s event, the NCAAs: all cancelled.

Liu, the only senior on the Wake team, looked at Lewellen and said, “Coach, I’m done. My season, my college experience — it’s done.” It was heartbreaking for her to say and for her coach to hear.

Lewellen immediately organized an impromptu Senior Dinner, at an Italian restaurant in Arizona. Many toasts. Laughter, tears — and then a giant never mind. The NCAA, in its wisdom, decided to give seniors another year of eligibility. Liu will come back for the 2020-’21 school year and, having already earned a bachelor’s degree, will enroll in a one-year MBA program at Wake.

But what that school year will look like is anybody’s guess.

Right now, Lewellen is in what is called a “dead period,” when coaches cannot recruit. So she and her husband, John, an Episcopalian minister, and their two teenage sons, are taking their normal August vacation on a North Carolina beach now. They are water people. Lewellen had to cut an ocean swim short on Wednesday night. There were too many Portuguese man-of-wars in the water.

Nobody would say, right now, things are going swimmingly.

“John says, ‘You were having a great year, but that year came to an end, and golf has to be on the backburner now. We all have to focus on other things,’” Lewellen said Wednesday night.

Some days she can accept her husband’s take on it all, and some days she struggles with this here-and-now. She has her players to look after, her sons, her husband. She can’t recruit. She can swim in the ocean. She can enjoy family dinners in their vacation house in Holden Beach, N.C. She can play golf. Lewellen is playing more golf now than she has in close to 20 years, when she was trying to make it as a touring pro as Kim Byham.

But the main thing for a college coach isn’t playing. It’s watching. Kim Lewellen is looking forward to getting back out there and doing some good watching.