‘A wealth of knowledge’: How Dustin Johnson became a Masters mentor 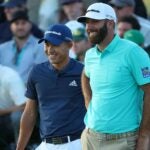 AUGUSTA, Ga. — Dustin Johnson has been golf’s lovable kid for so long, it’s easy to forget he became an adult.

But it happened, folks! He’s now 37, parlance for “over the hill” in most other major sports. He has kids, a soon-to-be wife, a gray hair or two. And … wisdom? You know it. At least when it comes to Augusta National, where Johnson has earned a PhD-level education in course management.

“I played Sunday afternoon and then Monday morning with Dustin Johnson, and kudos to him. He was a wealth of knowledge,” Higgs said. “He almost would come over and start talking to me when I would look confused. He could almost tell as if he was the same way when it was his first time around here.”

Back in 2009, when DJ was actually still just kid, he played in his first Masters at Augusta National. In 2022, he’ll play in his 12th — a stretch that includes his November 2020 victory.

In that time, Johnson has studied and absorbed every inch of the course, and like many experienced golfers before him, that knowledge has started bearing fruit during tournament week.

“DJ — on 16 when that flag gets over there middle right just over the bunker — he said if you have a great number, you be aggressive to it,” Higgs said. “Just into that bunker is fine. But if you don’t have a great number, maybe play it short and left. Basically allow it to roll down the hill and be hole high. The putt, that 35-, 40-footer is way easier from whole high and left than if you were to be aggressive, pull it a hair and rolls down the slope, and then you have that 35-, 40-footer from past the hole.”

When you hear folks talk about the importance of course knowledge to Masters veterans like Tiger Woods, they’re talking about details like these. At Augusta National, it’s not enough to know where to hit a shot — you’ve also got to know where to miss.

For Johnson, those lessons have come hard-earned. He had four consecutive top-10s before his breakthrough victory, including a runner-up finish at the hands of Tiger in 2019. Perhaps those lessons would have come a little bit easier if Dustin Johnson had the help of his own Dustin Johnson.

“Little things like that, that takes some time to learn, right?” Higgs said. “But, man, there’s no secret to it. You have to hit good golf shots sun up to sun down. Guys are really good, and most of the young guys, I don’t think they really pay attention to the moment. They get lost in what they’re trying to do. They trust their ability. They’re super confident in it, and a lot of guys just want to show off. They want to prove to themselves and everybody else that they’re capable of winning these things.”

Course knowledge is important, but in this instance, the source of that knowledge is a surprise. Johnson is under no requirement to share his trade secrets with his fellow competitors. In fact, competitive logic would point to the opposite, which is perhaps why Tiger is such a closed book.

“You might need to ask Justin Thomas. There’s only one man in this field that hears advice from Tiger,” Jon Rahm said Tuesday. “I’ve asked before and I get nothing.”

Tiger isn’t the only adult in the room anymore. That’s the thing with lovable kids: after a while, they get wise.

“I think it’s just kind of maybe not being too aggressive. Hit the ball in the fairway. Hit it on the green,” Higgs said. “Again, all the cliches work, but to hear that from somebody that’s won this golf tournament and has been number one in the world and is world-class in everything he does, then, okay, well, I better not play too aggressive.”