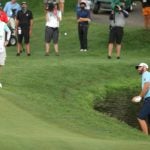 Dustin Johnson had to get rid of his shoes and socks to play one shot on the back nine on Sunday.

Dustin Johnson picked up PGA Tour win No. 21 on Sunday at the Travelers Championship, closing with a 67 to beat Kevin Streelman by one. But DJ still made it plenty interesting.

Take Nos. 13-15, for example. That stretch included a drive that was out of bounds by mere inches that led to a bogey, a textbook birdie and a par that consisted of nearly driving the green, almost losing a ball, removing shoes and socks to wade into water and then flubbing a chip.

Johnson was 20 under and led by three through 12 holes, but just as a Brendon Todd triple bogey gave him some breathing room, he blasted a drive out of bounds left on the par-5 13th. It was inches from being in play, but no matter, Johnson played his provisional and made bogey.

“I pulled it just a hair,” he said. “It wasn’t that bad of a tee shot. Obviously it just carried the bunker, rolled across the cart path there and was just barely out out bounds.”

Johnson got it back on 14 with a drive down the right side of the fairway, green in regulation and 16-footer for birdie, which led to his most interesting hole of the day, the short par-4 15th. Drivable for most pros at 294 yards, Johnson yanked his 3-hybrid left toward the water, but it somehow stayed dry on the bank, just feet from the hazard.

He then decided to strip off his shoes and socks and roll up his pants to get into the water and hack it out, but his chip came up short and rolled back down toward the bank, stopping in the rough once again. This time he chipped on and made a clutch four-footer for par, his most eventful of the week.

Lightning in the area suspended play soon after Johnson’s save on 15, but that stretch — the ups, the downs — proved crucial. When he and five others returned to finish their round an hour later, he bogeyed the 16th to make it interesting, but a par-par finish sealed his victory. He’s now won on Tour 13 straight seasons.

“I put in a lot of good work the last couple weeks after Colonial, and so it’s nice to see the game just start coming around,” he said. “Yeah, it was definitely strange playing with no fans, but you still can feel the pressure, you still can feel how important a golf tournament it is, and you’re coming down the stretch, to me it felt the same, whether it was a million fans or zero.”