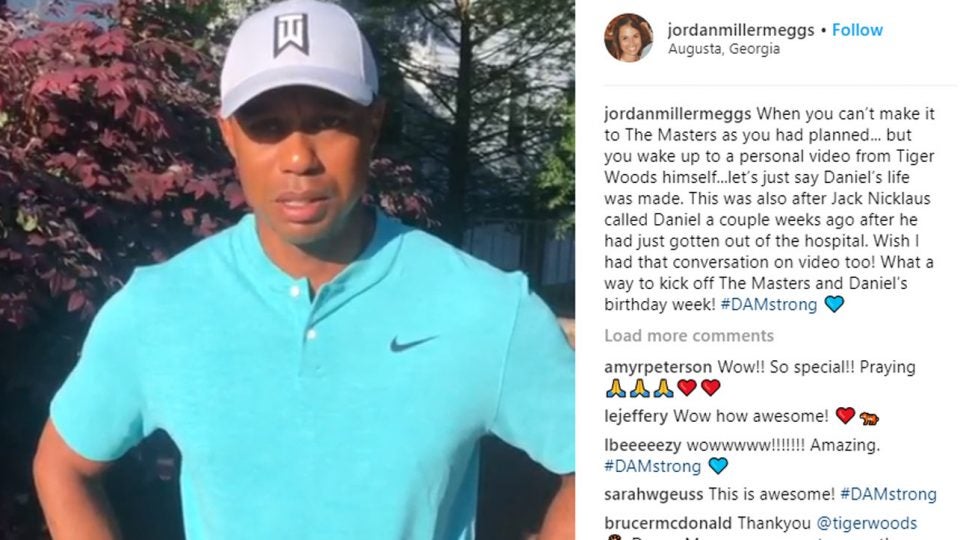 Last week, a video surfaced of Tiger Woods sending some words of support to a club pro in a life-and-death struggle with colon cancer. Now we know how Tiger’s missive was received by the patient, and his response won the day.

Daniel Meggs was diagnosed with cancer two years ago. Meggs happens to be friends with PGA Tour pro Harold Varner III. The two played college golf together at Wake Forest, and the topic of Tiger‘s video to Meggs came up in Varner’s Wells Fargo Championship press conference on Tuesday.

Varner revealed that he’d lost touch with Meggs over the years, but the two caught up when they ran into each other at last year’s Wells Fargo Championship.

Varner was encouraged by friends to ask Tiger to give Meggs a phone call or video message in support, but the veteran Tour pro was doubtful about the chances of it happening, saying, “I’ve never asked him for anything.” Varner asked Woods anyway, and once the video was sent, Meggs called Varner, and Varner’s good-humored reaction was priceless.

“I asked [Tiger] the week of Tampa and I got it the Wednesday of the Masters, and I sent it to him and he sent the greatest reply ever,” Varner said. “He said, ‘Well, I can die now.’ We’re laughing. He’s like, ‘No, man, it’s really cool. I needed this.'”

But that wasn’t all. Later on the call, Meggs made a prediction that would come true just four days later. He told Varner, “I think good things are going to happen because my birthday’s on Sunday.”

“Then he won and I called [Meggs],” Varner said. “For like a good 20 seconds, we didn’t say anything. We just cried. Like I’m just glad he wasn’t in front of me because I would not have said anything. It was just super awesome. Like I didn’t do anything, but the joy that I got out of like seeing him talk to me, I just can’t put it into words.”

Barring any complications with his health and treatment, Meggs plans on making his way back to Quail Hollow this week, and he may even carry Varner’s bag for a couple of holes. The whole experience gave Varner a new perspective on professional golf and life:

“Just what he’s going through and how that happened was way more important than Tiger actually winning,” Varner said. “He’s supposed to be out here today, so I hope I get to see him.”

You can donate to Daniel Meggs’ GoFundMe campaign to help defray the steep financial costs of his treatment.